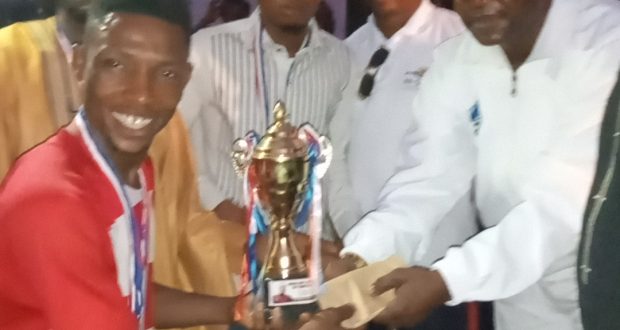 The 10th edition of Ukwok unity competition had ended in fanfare with the lion’s FC emerging the winner after an intensive two weeks encounter at Reebok stadium Usuk Ukwok Ini local government Area, the giant team defeated United fc by lone goal to clinched the trophy.

Presenting the trophy to the winners, the sponsor of the tournament Comr Nsibiet Umoh appreciated all the players, match officials and technical crew for their high level of sportsmanship while the competition lasted, adding that his primary aim of the game was to foster peace and unity in the community and to discovered talents within the teaming youths which according to him can be explored outside the shores of Akwa Ibom state.

The Ini born business man, further explained that, because of his love for humanity makes him to engaged the youths in productive venture inoder to help them become good ambassadors not minding the economic brain drain of the country, he noted that efforts are on top gear to expand the tournament in next edition while commending governor Udom Emmanuel on his developmental strides in repositioning the sport sector and making Akwa Ibom a choice destination for all sports competition.

Earlier in his address, the sport president Ukwok unity cup, Comr Marshall Archibong, thanked God for orderliness and unity they have witnessed right from inception of the competition, pour encomium on the brain behind the game for his confidence reposed on him and other members of the planing committee, he lauded the support enjoyed from all participants an promised to expand the competition to accommodate more teams in next edition. He therefore called on other good spirited individuals to emulates the effort of comr. Nsibiet in expanding sport competition and also building a peaceful society for all.

On their part, the community leader, Akparawa Asuquo Inyang csp (rtd) and a fontline sport activist in the community, Mr. Udom Jackson, thanked the sponsor for his commitment in local sport development, describing his philanthropic gesture as unprecedented, prayed for God blessings for him to sustained the competition.

The duo use the occasion to appeal to governor Udom Emmanuel to provide for Ukwok community the basic social aminities that will make life meaningful to their people, they explained that the community have suffered marginalisation and nelglet from previous administrations even when they contributed enormously in the emergence of those governors, they are always behind the trend of development, they called on the governor to restored their hope with road construction and electrification to boost businesses in the Area.

The competition which kick off December 2019 was performed by the senior special assistant to governor Udom Emmanuel on inter party Affairs. Hon. Lawrence Udoide and was watch by a glittering array of eminent sport personalities with a lot of consolation prizes for all the participanting teams.