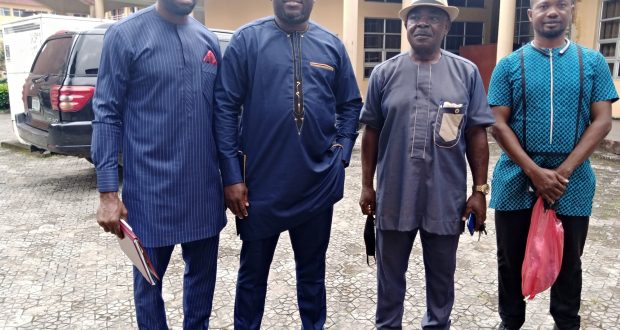 As the PDP Chairmanship standard bears for Ikono local government Area. Hon. Nyakno Uwemdimo Okoibu continue to seek for support for his aspirations ahead of the Saturday’s poll.
The Uyanga Heritage Foundation through their Acting Family Head ably represented by the Family Spoke person Dr. Peter Uyanga alongside with one of their son Mr. Simeon Uyanga, who by His Grace is the running mate to the Ikono Chairmanship Candidate, Mr. Nyakno Uwemdimo Okoibu, brought their support to the Chairmanship Candidate today presented campaign stickers, flags, etc to Mr. Nyanko as part of the family support.

Presenting the material, Dr. Peter Uyanga, expressed confidence that the Ikono Chairmanship hopefully will delivered creditable without any doubt while calling on all eligible voters to come out in good number to delivered my Okoibu.

It is also on records that the foundation is noted for their humanitarian services since in the 90s. History has it that ,Uyanga’s family suitated in Aka Ekpeme Ikot Ayan in Ediene/Itak clan has built markets, lock-up stores, Digitalized borehole system & civic centre and embarks on the internal gradings in the community for years.

The family representative said that human capital development will be the core plans of the foundation for communities in Ikono.

According to him, _”it is indeed a pleasure to have such a simple, dynamic and young person to pilot the affairs of Ikono, I believed with him, Ikono is in safe hand.” He said.

Previous: Youths Charged to embrace entrepreneurship for Wealth Creation …as Inyang’s foundation ends, maiden edition of Akwa Ibom Entrepreneurship conference in Uyo, With cash prizes presented to winners of his essay competition
Next: Clem Ohameze: Robbers Took N650,000 From Me, All My Phones, Destroyed My car