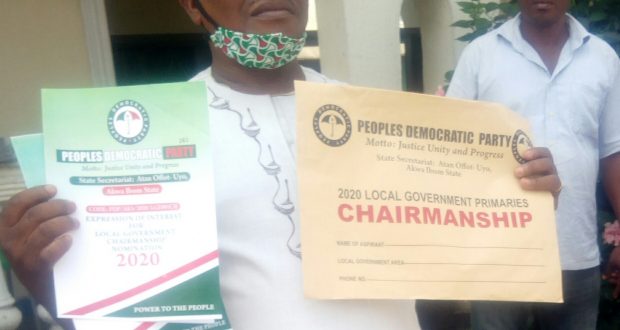 The Chairmanship aspirant in the forthcoming local government election, Hon. Ekpeyong Daniel Etim has picked Chairmanship form with the promise to unite the people of the area and vigorously transform socio-economic potentials of Nsit Atai for the well-being of his people.

Etim made this known while interacting with journalists immediately after receiving his Chairmanship form at the PDP Secretariat, Edet Akpan Avenue, Uyo yesterday. He said “I have what it takes in terms of leadership dexterity, experience, entrepreneurship and managerial skills to manage Nsit Atai local government area effectively for greater productivity and development for collective interest”.

Also, Hon. Ekpeyong Etim further explained that Chairmanship position in the area has been rotating among the Zoning areas based on this arrangement, which he emphasized this has helped tremendously to stabilize the area politically and also promotes peace in Nsit Atai. Accordingly, the Chairmanship aspirant has also promised to unite Nsit Atai people, promote peace and also fastrack development of the area if elected into office as the council Chairman.

Hence, he has appealed to the good people of Nsit Atai to support him to emerge as the council Chairman, and he will not disappoint them. He noted that as an astute administrator he will bring his experience to bear in the discharge of his duties with all round success.

Previous: STATEMENT BY THE HONOURABLE MINISTER OF NIGER DELTA AFFAIRS, SENATOR GODSWILL AKPABIO ON THE TRANSITION OF THE AKWA IBOM STATE CHAIRMAN OF THE APC, HON. INI OKOPIDO
Next: Governor Udom Emmanuel must not fail. ~Ephraim InyangEyen