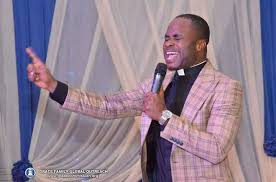 A Nigerian clergyman has raised alarm: “Nigeria should stop celebrating laziness as we are yet to come out of the cocoon of the Fourth World country in the world.”
Rev Patrick Henry Edet of Grace Family who threw the challenge as Nigeria is celebrating the inaugural June 12 Democracy Day is uncomfortable with the observance of many public holidays in a year in Nigeria.
Two days last week were observed as public holidays that marked Ed-El Fitr celebration while the hitherto May 29 Democracy Day was observed as public day in a row of period that the man of God described as “bizare.”
Edet who spoke this on Wednesday in a two-hour radio programme in Comfort FM, Uyo dedicated to what he called ‘grace’ bemoaned the declaration of June 12 as Democracy Day, decrying the type of democracy practised in the country.
“Look at the way the Chief Justice of Nigeria was indecorously removed from office. Was that democracy? Was democratic process adhered to in the removal of the CJN? There are many other democratic infractions. I am not criticising but I am volunteering my opinion,” he submitted.
Of course, the Federal Government announced the suspension of Hon. Walter Onnoghen, the immediate past Chief Justice of Nigeria as as soon a group petitioned to the Code of Conduct Tribunal (CCT) that he failed to properly declare his assets to Code of Conduct Bureau.
Speaking on the observance of June 12 Democracy Day, the clergyman differed that “There are better ways to celebrate and honour the late M. K. O. Abiola not necessarily declaring public holiday.”
Abiola who was acclaimed to have won the botched June 12, 1993 presidential election was not declared a winner, a situation that resulted in the Social Democratic Party’s presidential candidate declaring himself elected President.
Eventually, Abiola regarded by some as the bastion of today’s democracy died in detention before the military handed over power to Nigerian civilians in 1999.
“World leaders are laughing at Nigeria because of the number of public holidays in a year. They know the myriad of problems confronting the country, yet we continue to waste many days as public holidays.
“The bankers may be happy because the public holidays help to relieve them of hectic working hours. But then we lose much money. We lose precious official man-hours which could help to reboot our economy and reduce mass unemployment plaguing the country,” he stated.
Edet, therefore, charged the country’s rulers “Instead of celebrating laziness in the name of public holidays, let us celebrate hard work.”
He used the opportunity to pray against the pervading insecurity and for good governance in the country in a bid to launch Nigeria into Third or Second world economy.