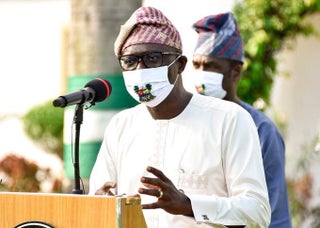 The Lagos State Government has made known its plan to employ 2,000 teachers in its public primary schools, IgbereTV reports.

The state Commissioner for Education, Folashade Adefisayo disclosed the plans or the recruitment during an online show, Covinspiration show, moderated by a United Nations (UN) Youth Ambassador, Dayo Isreal, while giving scorecard of Governor Babajide Sanwo-Olu led administration within the 360 days.

Adefisayo said the move to employ more teachers was aimed at the standard of public primary school education in the state.

She said that the pandemic has held the ministry of education back in the completion of its plans for the sector.

Adefisayo said, “The administration after assumption of office decided to address the challenges in education aggressively in 2020 but the pandemic which country’s index case happened in Lagos has halted various plans for education in the state.”

She said that administration went back to the drawing as soon as President Muhammadu Buhari lifted the lockdown earlier imposed on Lagos and other states so as to fast track completion of 2020 plans which includes recruitment of teachers.

Adefisayo said, “The most important aspect of learning is the quality of teachers and we did not have enough teachers to actualize the set plan for learning in our public schools.”

“And one of the earliest things we requested for and was granted by the governor was the recruitment of teachers.

“And we are looking at employing teachers every quarter because the rate of retirement of teachers is very high in Lagos.

“The administration has granted the ministry permission to replace retired teachers.

“Aside from recruitment, we have sent a lot on the training of current teachers to improve their teaching skills in classrooms. And this COVID-19 period was the time when we were able to do a lot of things in the education sector of Lagos state,” she added.

Speaking on school reopening, Adefisayo explained that governor Sanwo-Olu does not have the authority to unilaterally give directive for the reopening of schools, saying, “Like other sectors already approved by the Federal Government to reopen, the state government is meeting with officials of the Federal Ministry of Education to design guidelines that must be adopted before the schools will be reopened.

“We are watching the behaviour of the pandemic to see what happens next and we are working with the Federal government on the reopening of the schools in the country as soon as possible.

“This is not a decision that any state can unilaterally take on its own. If we are certain that the children are safe, we will reopen the schools for learning to resume.

“We are already working with the Federal Ministry of Education and they are working with National Center for Disease Control (NCDC) on the guidelines that could be adopted when the need arises for the schools to reopen.

“After the protocol is completed and health officials assured us that the coast is clear, we will give the schools some days to adjust their premises in accordance with the guidelines on commencement of academic activities”.