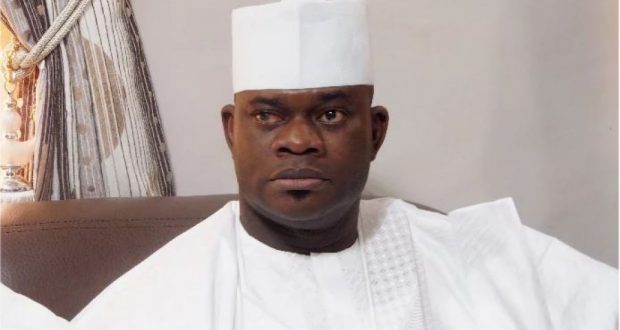 Kogi state governor, Mr Yahaya Bello, says he borrowed N10 billion in addition to the last tranche of the Paris Club refund to clear four months (4) backlog of salaries in his state.

Mr Bello who spoke with  State House Correspondents after he observed the Ju’maat prayer at the Aso Rock mosque on Friday, January 5, said the state is no longer owing salaries.

The Kogi governor said the civil servants who clock-in to work, both at local governments and state levels, would be paid from January.

“In Kogi state today, we are up to date as far as salary is concerned. In the month of December like Mr President magnanimously assisted us with another tranche of Paris Club Refund, our own figure was N1.2 billion and some other change on top.

“We didn’t just stop at that, we borrowed up to N10 billion and we added November/December allocation to our figures and we were able to clear four months at a stretch before Christmas and some leftover were cleared before this January in Kogi state.

“As you all know the salary was very bogus and according to the figure we had, we were able to distribute it among these months. So, glory to God as far as Kogi state is concerned, we are not owing salaries.

“Moving forward from this January, we have decided that we are going to make use of our clock-in device for every civil servant in Kogi state both at local and state levels.

“So that as you come to work and clock-in, that is exactly how your salary will be generated. It is online, it is automated so nobody is going to cheat anybody,” Bello said.

Asked if he gave cars and N2m each to masquerades in his Okene hometown, Governor Bello said he was hearing of such for the first time.

“I think I’m just hearing that for the first time. But let me just tell you that in Kogi state, first, we promote culture, two we don’t give millions to masquerades.

“In our culture masquerades are ancestors, I don’t know how a masquerade will go and spend money? Is it in the grave?

“They are supposed to be spirits and I don’t know how masquerades will spend money. There is nothing of that nature at all.”

Speaking on President Muhammadu Buhari’s reelection, the governor said Kogi state has endorsed the President for a second term, adding that the votes from Kogi would floor that from Katsina, the president’s state.

“So Kogi state has already endorsed President Buhari for the second term, we are just waiting for the time to come.

“You are going to see the votes that will come out of Kogi state, it will dwarf that of Katsina state I can assure you,” he said.