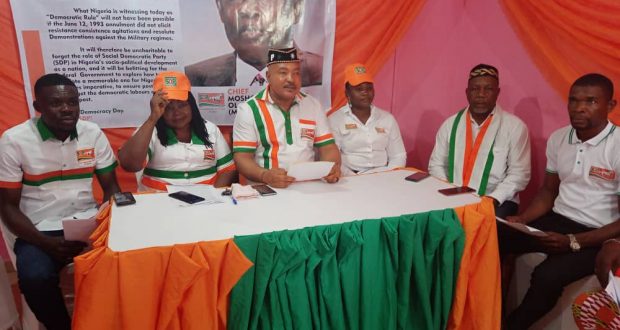 The Akwa Ibom State Chapter of Social Democratic Party (SDP), had on Saturday, June 12, roll out drums to celebrate the sacrifices of their heroes past most especially Moshood Kashimawo Abiola, whom they described as the father of modern democracy.

State Chairman of the party, Hon. Willington Odiong, while addressing the Press on the occasion of this year’s democracy Day at the party state secretariat, 20 Kelvin lane, Uyo, noted that the declaration of June 12 as the nation’s new Democracy Day in honour of the role of MKO Abiola will ever remain one of President Muhammadu Buhari’s enduring legacies.

The SDP State Chairman, in his message said in the annals of the nation’s political history and democratic evolution, June 12 had come to symbolize the most epochal national event of contemporary Nigeria.

“Today we join Nigerians in celebrating the day in which democracy dispensation was restored.

Exactly 28 years ago, Nigerian went to the poll in the third Republic of its democratic dispensation to elect her president. June 12, 1993 was a date Nigerian went en masses and voted MKO Abiola under the Platform of Social Democratic Party, which Chief Moshood Oluwale Abiola came out victorious. What Nigeria is witnessing today as democratic rule would not have been possible if the June 12, 1993 annulment did not elicit resistance, consistence agitations and resolute demonstrations against the military regimes.”

He further stressed that the time has come in the history of the country when everyone must join forces to build bridges and demolish fences, said all quest for self-determination and other sectarian agitations must be shelved for one indivisible country.

The party boss expressed disappointment with the APC led administration, bemoaned that corruption has entered deep into the core value of our society, as leaders keep fighting corruption, unemployment with lip service and bias mindset such that if you are found guilty but belong to the ruling party, you will be exonerated from your sin.

He used the occasion to called on leaders at all levels to fulfill their campaign promises , while expressing confidence and readiness of his party to take over power from the All Progressives Congress and the President, Muhammadu Buhari in 2023, to give Nigerian a country of their dream, as the party is coming up to correct the wrongs of APC.