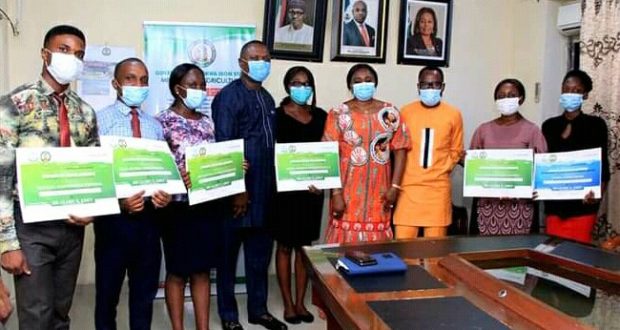 It was uncontrollable emotion of happiness and joy on Friday, May 21, for six (6) medical student studying in various Nigeria Universities, as the Honourable Commissioner, Ministry of Agriculture once again raise their hopes as she awarded scholarship to a medical student and payment of all fees and logistics to another five for one academic session under the aegis of National Association of Akwa Ibom State Medical Students.

Presenting the scholarships which cover tuition fees and other peripheral charges, Dr. Edet said that the gesture was a further demonstration of the huge importance that Governor Udom Emmanuel led administration places on the qualitative education of every Akwa Ibom child.

Dr. Edet advised the beneficiaries to strive for excellence, be exposed to the rudiments of medical profession in order to attain loftier heights in their future endeavours.

The Commissioner noted that as a lecturer and former Staff Adviser for students, University of Uyo for about 8 years she is in the known of students plight.

“I am the commissioner for people, I must use my office to put smile in people’s faces, the position am holding now is from God. As students your future is in God’s hand because He can do anything anytime.”

In his remarks, the State Chairman of the Nigeria Medical Association, NMA, Dr. Ime Udo who witnessed the occasion, appreciated the Commissioner for her gesture. Udo
described Dr Edet as being so passionate about humanity, said such love is born out of trust and honesty to promote good governance and a sense of belonging to the less privilege people.

“Madam you have touch life more than what the camera can capture, I’m surprise with your level of humility exhibited in all occasion, heaven is recording your good works.”

Responding on behalf of the beneficiaries, Comrade Utomobong pledged to reciprocate the Honourable Commissioner’s gesture by taking their studies seriously in order to make the State and Government proud in the foreseeable future.

Utomobong said he is committed in fulfilling his administration promises to prioritize the welfare of Naakimsites and to put smiles on faces of the most vulnerable ones, pledged his unalloyed support of the present administration in area of quality education.

He implore the beneficiaries to be hardworking and studious, not looking at their poor background but believe in God for sustainability.

In her response, recipient, of the full sponsorship Comr. Emem, Umoh who could not hide her joy, broke into tears of happiness with prayer for the commissioner’s magnanimity in restoring hope and given her life, when all hope was gone. She appreciated the
association led by Comr. Utomobong for speaking on her behalf, wish him and his exco a successful tenure in office.

It could be recall that Dr. Edet made the promised March 8, 2021, when Akwa Ibom medical students led by the Worldwide president Utomobong Udo, paid her a courtesy call in her office, Idongesit Nkanga Secretariat to confere on her an award as the female patron of the student Doctors, and appealed for assistance for most vulnerable students.