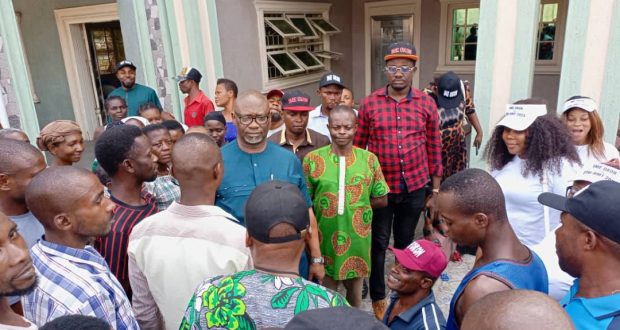 The Paramount Rulers and PDP delegates in Itu and Ibiono Ibom LGAs have expressed conviction that Rt. Hon. Barr Ime Bassey Okon will make effective representation a reality when given the mandate of Itu and Ibiono Ibom in the Green Chamber of the National Assembly in 2023.

The Itu/Ibiono Unity Project Campaign 2023 train made a quick stopover at the palace of the Paramount Ruler of Ibiono Ibom LGA, HRM Okuku Ime Udousoro Inyang for royal blessings and to formerly informed the traditional seat of the House of Representative aspiration of Rt. Hon. Ime Bassey Okon.

Before the royal blessings, the aspirant, Rt. Hon. Ime Bassey Okon said he is coming to the royal palace as a son to be blessed by the father. He added that the Paramount Ruler has always been a father figure and supporting him right before the demise of his biological father in 2002.

The Royal Father said he has been blessing him; and will continue to bless him for being a loyal and trustworthy son.

HRM Okuku Ime Udousoro Inyang advised those in the team to be honest in their support for him.

“I want to say that if there is anyone here who does not believe in the aspiration of my son, Ime Bassey Okon, please should leave the Campaign group. Ime is honest, trustworthy and straight forward in dealings with people. He does not speak from both sides of the mouth and deserves true support of Itu/Ibiono people.”

The Monarch however expressed conviction that when the people finally make their support count by sending Hon Ime Okon to National Assembly, “he will not leave the people behind as he will be in constant touch with the people because he has proven his accessibility over the years.”

Also, the Paramount Ruler of Itu LGA, HRM Dr. Edet Akpaninyang lauded the credentials and personality traits of Barr Ime Okon and opined that no Itu person should vie for the position.

“Since Ibiono Ibom and Itu have taken their three, three terms for House of representative, it behooves that the zoning round should start with Ibiono Ibom again with an Ibiono Ibom person sent to represent Itu/Ibiono in the lower chamber of the National Assembly.

“Even if I hear that an Itu person is indicating interest in that office, I will personally tell the person not to run for it is the turn for Ibiono Ibom,” the Royal Father submitted.

The Royal Father advised Rt. Hon. Ime Okon to keep close touch with Itu/Ibiono people so to have legislative inputs which will improve the wellbeing and strengthened the bond of Itu and Ibiono Ibom people.

Royal blessings were offered to the aspirant and his entourage for the electioneering journey to be successful.

Earlier at Ikpa Ikot Ubo, Ibiono Ibom LGA, the Itu/Ibiono Unity Project campaign 2023 train first made a stopover at the palace of the Group Head of Mbiabong Nsan, Chief David Ekpenyong, to pay homage for royal blessings and officially consult the royal father of the area about the aspiration.

He reminded Ibiono Ibom delegates and visitors present at the visit that the village council hall which they are currently occupying was made habitable by the aspirant during his first time as a Lawmaker in the House of Assembly by plastering, ceiling, providing doors and burglary proofs to the building which was in poor state.

The PDP Chapter Chairman urged Barr Okon to go ahead with his consultation without relenting and wished him well in his campaigns.

His counterpart in Itu, Hon Victor Okon said that he believes strongly that the representation of Itu/Ibiono people through Hon. Ime Okon will draw dividends of democracy to the people of Itu as well as Ibiono Ibom people.

While speaking on his aspiration, Barr. Ime Okon said his experience as a Lawyer, Transition Chairman and a two-term Lawmaker further buttressed the fact that Itu/Ibiono does not need a novice in the National Assembly.

He swiftly took a roll-call on few of his achievements while as a Transition Chairman and House of Assembly Member. These included; Payment of backlog of bursary to Ibiono Ibom students in tertiary institutions; reinstatement of 82 entrenched council workers whose appointments were suspended due to a protracted court case.

As a Lawmaker, he said he has been able to give over 16 car gifts to constituents, even at the wee hours of his tenure. Run quiz competition for secondary schools in Ibiono Ibom for seven (7) uninterrupted years in the life of his legislative representation.

Others who spoke during the consultation visit included; Dr. Iniobong Essien – Chairman, Ibom Airport Development Authority; Barr Ini Ememobong – Commissioner for Information who was represented by his elder brother, Prince Charles Ememobong; Chief Israel Utit; Hon. Etop Idung (former Commissioner for Information); Woman Leader – Mandu Nduese, all spoke in glowing terms of the personality and experience of Barr Ime Okon which are needed credentials for effective representation for Itu/Ibiono Ibom in the Lower Chamber of the National Assembly.