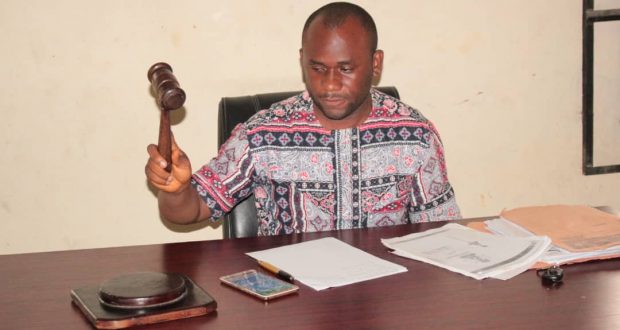 Councillors in Itu Legislative Council have frowned at recent news reports spread by the media and credited to the Chairman, Akwa Ibom State House of Assembly (AKHA) Committee on Local Government and Chieftaincy Matters, Rt. Hon. Mark Esset, which they say is seemingly aimed at portraying the Local Government administration, led by Hon. Barr. Etetim Onuk as redundant Speaking during the Sitting of the House on Thursday at Mbak Atai, the Leader, Itu Legislative Council, Hon. Barr. Bassey Bassey said the impression created by the media after the AKHA Committee made an unscheduled visit to the Secretariat is false and unfair. He stated that Itu Local Government Council has not been neglected as touted and that Officials and staff go to work regularly. Barr. Bassey said the Local Government’s Legislative Council acknowledges the Constitutional powers of AKHA Committees to carry out oversight functions and that government matters are done within the ambit of the Law. He added that in like manner, the Legislative Council in the Local Government also have the right to do same within their area of jurisdiction. He said it was rather disheartening that government apparatus and agencies would make attempt – in the discharge of their functions – to malign other government apparatus, whether at the federal, State or Local Government level. The Leader who doubles as the Chairman, Akwa Ibom State Councillors forum disclosed that it smacks the imagination of Itu Legislative Council as to the sincerity of the oversight functions of the Committee, as other laudable projects within and outside the Secretariat were not captured, rather a just a sore point was surreptitiously highlighted.

“In furtherance of our thoughts, the Legislative Council imagines whether it is not within our competence to also embark on oversight duties. On the said date the Itu Legislative Committee on the Whole embarked on a tour of erosion sites within the area, since our responsibility as Councillors begins at the Constituency offices and ends at the Secretariat.” He said.

Furthermore, the House Leader said the Council’s Legislature, is satisfied with the performance of the Executive arm of governance in the Local Government Council, and urge him to sustain the tempo and ensure the completion of all ongoing projects.

He said they believe that if the oversight functions were to be carried out with good intent, notice should have been given to them as fellow elected officers and a tier of government and described the remark of the AKHA Committee as hurtful to the corporate image of the Local Government Area, having being aired and projected on the social, electronic and other local media platforms.

Also lending their thoughts on the verdict of the House Committee on Itu Local Government Area, Members of the Legislative Council representing Ward 8, Otobong Ekong; , Bokime Edem of ward 6, Felix Andem of ward 2 and George Akpan of ward 5 said the insinuations were not a true reflection of the situation in Itu as the administration of the Chairman, Barrister Etetim Onuk, had since inception, recorded remarkable successes in the execution of projects and implementation of policies, which has impacted in the people positively and changed the face of the area.

The Legislative Council thereafter unanimously made a resolution, condemning the description of the Council as redundant and also passed a Vote of Confidence on the Chairman, Hon Barr. Etetim Onuk and the Local Government administration, following a motion moved by the Member representing Ward 5, Hon. George Akpan and seconded by Hon. Helen Nta of ward 1.