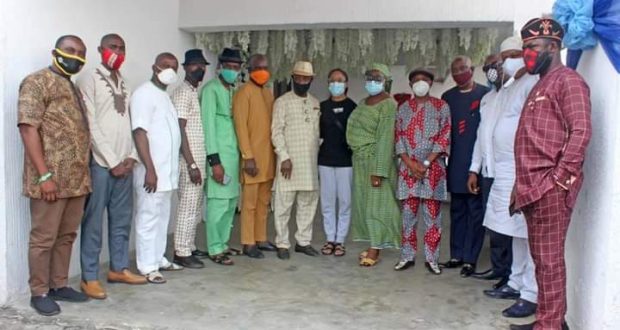 Rev. Aniebiet Emmanuel, leader of the delegation, said the body was in Nsit Ibom to sympathize with the Nkanga’s family over the death of the former Military State Governor.

The State Chairman of Peoples Redemption Party, PRN and spoke person of IPAC, described late Nkanga as a hero, whose contributions has given Akwa Ibom a new face in the area of peace, unity and development.

“We are here devoid of party line, because of the respect we have for the family. Late Nkanga was a good image of the state, he believed in total integration, inclusion and equity in resolving today’s and future challenges facing the country.”

On his part, Xst Ambassador Martin Ansa, a two term IPAC Chairman, who doubles as state Chairman of Accord Party, said Nkanga was a hero of no mean reputes, a forthright leader who has left a big vacuum in the arena of the Nation’s affairs, noted that Akwa Ibom has lost one of its most outstanding statesmen, whose contributions to Nation’s building and Inter Party growth in the state is worth celebrating, while calling on emerging leaders to borrow a leaf from late Nkanga’s leadership prowess.

Responding, the Special Adviser Bureau of Political and Social Re-Orientation Hon. Elder Amanam Nkanga, while receiving the IPAC team thanked them for their wise decision to share in the family’s moment of grief.

“I’m honored by this show of love and respect accorded to me by IPAC and i will not take it for granted. Your visit means a lot to the family, it also indicates that late Nkanga torches lives across party lines, which has been the driving force for today’s visit. As you have honour us today, God will honor you in abundance.”

Also speaking wife of the deceased, Deaconess Funmi Idongesit Nkanga, thanked IPAC for the visit, appealing for their cooperation in the Akwa Ibom State Project and further sued for peace, love and Unity as always demonstrated by her husband.

The immediate past vice chairman of Nsit Ibom Local Government Council, Hon. Elder Samuel Nkanga and other members of Nkanga’s family was in attendance.