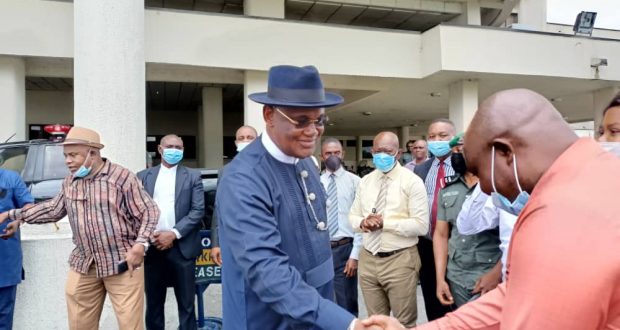 The Chief of Staff to the Governor of Akwa Ibom State, Akparawa Ephraim Inyang-Eyen, has lauded men and officers of the National Agency for the Prohibition Against Trafficking In Person (NAPTIP) for partnering the Udom Emmanuel led administration in combating human trafficking and all forms of human degradation in Akwa Ibom.

Inyang-Eyen, who gave the commendation at his office on Wednesday while playing host to the Akwa Ibom Zonal command of NAPTIP assured State government’s continuous support to ending the scourge of trafficking in persons.

To match words with action, Inyang-Eyen handed over a fully restored Toyota Hilux vehicle to the Zonal commandant. The command’s vehicle was broken down and was in that dilapidated state until they sought the assistance of the CoS.

Promising to present other requests of the Federal Government Agency to the Governor, Akparawa Ephraim Inyang-Eyen urged them to continue to join hands with his boss and other security formations in the State to sustain the peace that has been made possible by God Almighty through Governor Udom Emmanuel.

Highpoint of the visit was the presentation of the fully restored Toyata Hilux Vehicle to the Zonal Commander, Mr. Ubong David Ekwere who came with his team.

The presentation was also witnessed by SA to the Governor, Mr. Sampson Akpan and a team from the Akwa Tourism Development Company LTD (AIDC) who also presented ‘The Distinguished Tourism Pathfinder Icon’ Award to the CoS for his contributions to the development of the tourism sector in the State.