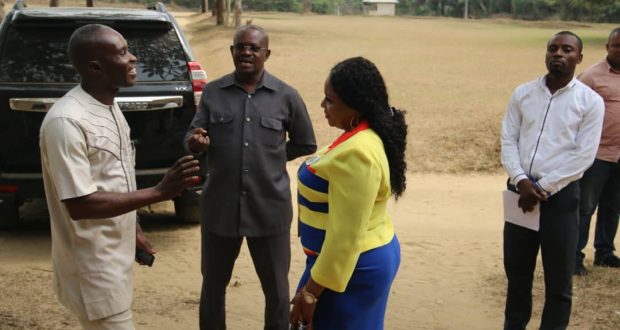 Late Nelson Mandela, former president of South Africa once said in one of his quotes that “Education is the most powerful weapon which you can use to change the world “. From the above statement, it is evident that education is an indispensable , a critical component which contributes extensively in human development indices and individual’s goal attainment with an intrinsic value which extends beyond economic terrain.

In line with this assertion, the Akwa Ibom State Government, through the leadership of Governor Udom Emmanuel have deployed all available resources to checkmate the activities in our public schools in order to boost our Educational section.

This can be testified to, by the on-going monitoring exercise led by the senior Special Assistant to the Governor on education monitoring, Mrs. Idongesit Etiebet and Special Assistant to the Governor on same matter Akparawa Udeme Udofia. The duo have been on the watch of some schools since the resumption of the new academic year to enforce and regulates government policies and programs.
The SA to the Governor on education monitoring, Akparawa Udeme Udofia accompanied by other members paid an unscheduled visit to schools in Eket Senatorial District to ascertain the level of compliances by teachers and students.

The Acting Principal, Mr. Clement Nkanta reported that the School Principal, Mr. Paul Okon was absent for medical reasons, which the State Government was officially briefed at the time of occurrence by the Principal through a letter.

The Education Monitoring team not please by what they met on ground, instructed the acting Principal to query all teachers that were absent without permission and submit same to the Akwa Ibom State Government for sanctions within the next 48 hours.

The team also commended the school for their neat environment but appeal to the students to study hard to improve in WAEC examination. The case was different at Community secondary school ,Eyo Abasi ,as students and teachers were very orderly, the Principal Mr. Eka Etuk took the team round the school to also monitor the teaching processes.
Other schools in the trend of visit, includes, Mary Hanny Secondary School, Oron with the population of over four thousand and twenty six students (4026), where the principal Mrs. Ema Ubonabasi was on hand to received the team. At St. Vincent secondary school, Otio Oro, in Okobo local government Area with Mr. Steven Akpabio as the Principal received the officials and took them round the school with a passionate appeal for government support. At Government primary school Iquita Oro, the Head teacher Mrs. Rose Aniefiok Bassey thanked the team on their oversight function and promised to double effort in moulding the pupils

Akparawa Udofia used the visit to admonished teachers who were not on their duty posts to abstained from such act if the want to keep their jobs as government would not failed to punished those who are off duties for no reason. He advised them to impact and inculcate good moral to the students.
He equally assured all parents of government readiness and commitment in giving every Akwa Ibom child the best education obtained any way in the country.

It is on record that recently the state government through it mechanism State Universal Basic Education Board( SUBEB) recruited teachers into public primary schools to boost the number of work force as well as renovated dilapidated structures in our public schools.

However , the monitoring team through Akparawa Udofia further appeal to the State government to inject more funds for training and retraining of teachers both the permanent and the adhoc in order to equiped them with modern teaching techniques to enable them to complete with their contemporaries across the country and delivered best services to the children. Judging from the ground assessments, they have recommended that priority be given to competent hands in the selection and recruitment of head teachers/ principal to man our various schools any time government want to do recruitment.

With this and other remuneration put it place for teachers, it is believed that the standard of education in the State would improve and yield the desire result.