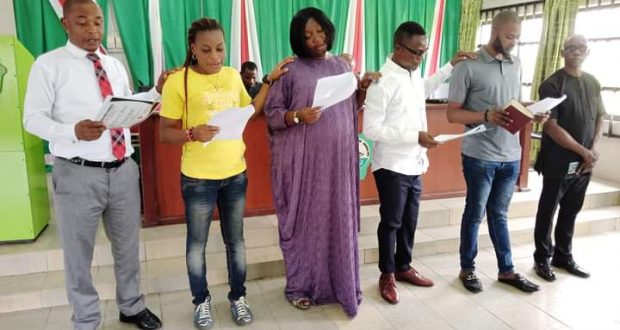 Insight Newspapers Chapel of the Nigeria, Union of Journalists, NUJ, Akwa Ibom State Council, on October 18, elected new executive to pilot its affairs for the next three years.

The election held at the NUJ Secretariat, Information Drive, Uyo, was supervised by the State Council, led by the State Secretary of the Union, Comrade Dominic Akpan.

In his remarks, the State Secretary, Dominic Akpan, congratulate the new executive for their successful emergent, urged them to take responsibility of their actions, see the mandate as a call for duty, pursue the interest of members as their cardinal objective and bring in fresh air to the chapel.

Comrade Akpan who acknowledged the transparency and integrity of electoral committee headed by Comrade Moses Tom, Comrade Emmanuel Sampson as Secretary and Ekaette George as member, said the peaceful process that heralded the election was a great vindication that a new dawn had come to the Chapel.

Others include, Comrade Emem Okon Treasure; Comrade, Imaobong Koffi-Bassey, Financial Secretary, while Comrade Emmanuel Udoatta is to serves as Auditor.

The Commissioner of Oath, Barr Sylvester Edet who inaugurated the new executive charged them to uphold the Constitution of NUJ in their professional duties, inorder to maintain the reputation of the union.

In his acceptance speech, the new chairman, Idongesit Akpan who returned unopposed, thank other contenders who stepped down for him to emerge described the decision as a welcome development.

He informed that the task before the new executive is enormous, appealed to all and sundry to give him all needed assistance for him to succeed.