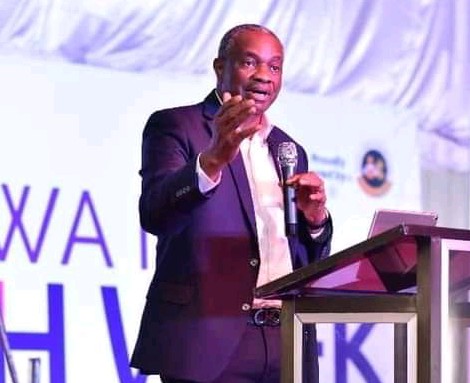 Weak institutions in any clime, will definitely fester corruption, injustice, and disdain for the rule of law. But strong institutions blaze the trail, entrench procedures, and are proactively responsive to whatever seeks to distort the flow of sanity in any given society.

Mr Udom Inoyo has shown a strong sense of commitment towards enhancing human and institutional capacity through trainings, rewards, connection and inspiration. This he has brought to bear on the various professional bodies and institutions that identify with him.

The 2021 maiden edition of the Ray Ekpu investigative reporter of the year award, instituted by Mr Udom Inoyo for Inoyo Toro Foundation, to celebrate Mr Ray Ekpu, a quintessential Journalist, was won by Abasifreke Effiong and Ekemini Simon.

The duo shared the five hundred thousand naira (N500,000) prize money and a laptop each. This was unprecedented and the biggest prize money in the history of journalism awards in the state. Obviously, the stake is higher and the pedestal raised for the practice of journalism, and the State Council will certainly now be viewed from a more respected hindsight.

Journalism practice is beginning to ooze a more adorable aroma and earning deeper respect. Udom Inoyo, identifying with Journalists in such manner is entrenching professionalism, building healthy competition and bids the younger generation to come on board.- There is something good in journalism practice, so practitioners can excel like Ray Ekpu, Nsikak Essien, Anietie Usen, Moffat Ekoriko, James Akpandem, Comfort Umana, and Helen Udofa.

The Nigeria Union of Journalists’ Award and Dinner Night, held recently at Emerald Event Centre, saw the above named veteran Journalists being celebrated. It was a night of glitz and glamour with a potpourri of eminent personalities. Former Senate President, Distinguished Senator Ken Nnamani was chairman of the occasion. The interim National Secretary of All Progressive Congress (APC), Senator James Akpan Udoedghe, Senator Ita Enang, Mr Eseme Eyibo and Declan Opaleke, a three time CNN African Journalist Award Winner, were all present.

The Governor, Mr Udom Emmanuel, represented by the Commissioner for Information and Strategy, Comrade Ini Ememobong, congratulated the award winners and observed that the winners of the Ray Ekpu Award for investigative Journalism were lucky to be working as investigative journalists in Akwa Ibom State. He pointed out that the entry which won them the award was only possible because of the enabling environment provided for them to thrive by the State Government.

The NUJ Award and Dinner Night was relished by both the APC and PDP. Senator Nnamani actually said, Governor Udom Emmanuel was doing well, and Senator Udoedghe begged that APC be given a chance in the state. PDP, through the Commissioner, in perspective praised Senator Nnamani for preserving democracy by not allowing the third term agenda to scale through. Indeed, it was a night not to be forgotten in a hurry.

The Foundation has in no small measure contributed to the professionalism displayed by teachers in the State. Teachers are now receiving their rewards here on earth, and we are seeing the positive impact of this as we keep having children in public schools compete very well with their fellow students in private and public schools in other climes.

Teachers and Journalists are not the only ones touched by Mr Inoyo, he had extended his midas touch to lawyers. At the last Uyo Bar Week, where he was the keynote speaker, Mr. Inoyo instituted training for lawyers and with no waste of time, he began training for lawyers in areas not threaded by most lawyers in the state, like the oil and gas sector, the blue economy, contractual and company law.

Inoyo had said in one of his outings: “My passion is to create value in the people so they will be useful to themselves and society, not people who would be begging for handouts to survive. My mission is to create capacity in youths to be self sustained, independent job and wealth creators; if leadership is not to show the people the road to better life and future, then the opportunity is a wasted one.”

These words became a living reality when in October 2021, The Akwa Ibom Tech Week Pitch Competition was sponsored by Inoyo Toro Foundation and the 100 Million Boot Camp began in October.

Invariably, the philosophy focus of Mr Udom Inoyo is human capital development. This has been on for more than two decades as he as a person has been engaging his skill, money and connections in the building of sustainable institutions and individuals. Consequently, after the industrialization policy thrust of this administration, the next focus should be on human capital development and Mr. Inoyo holds the key to unlock that system for the benefit of the Akwa Ibom people.