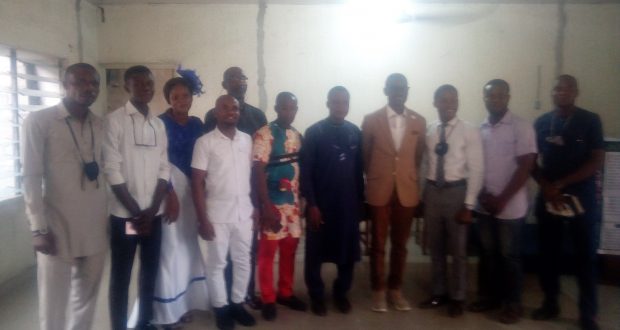 An Expository Colloquium organised by the International Network of Christian Students and Youths INOCS, to find answers to numerous nagging but misleading questions, last Sunday, February 28, ended in Uyo, the Akwa Ibom State Capital, with Biblically established affirmations that God is the supreme ruler of the World, not Satan as erroneously believed and preached by many.

The Colloquium which had as its theme, “Who Really Rules This World, Is It God Or Satan?” had Christian Students from numerous institutions of higher learning in attendance.

Declaring the event opened, INOCS President and Convener of the parley, Amb. Chris Akpan said the essence of the colloquium was to delve into the Bible and proffer answers to many topical and mind boggling questions which has hitherto led many Christians in their Christian walk astray and has today continued to deceived many into Hell.

Amb.Akpan who is also the Vice Chairman of the group’s Advisory Council stressed that there was the need for children of God particularly students who are still in their formative years to be properly guided and educated in regards to this all important issue to serve as a lamp to their path and light unto their feet.
He urged Christian Students not to imbibe principles which are not founded in the Bible and grounded in God, promising to make such parley a monthly affair.

Also speaking, a former National Chairman of the Nigerian Medical Association (NMA) and Dental Council of Nigeria, Dr Edmundson Akpabio who described a colloquium as essentially an interactive session informed, that he first heard of INOCS while he was still steering the ship of NMA in Nigeria and has since been in love with the organisation hence, his consent to honour the group’s invitation.

Dr. Edmundson Akpabio who is the Proprietor of Mfon Abasi Medical Centre, expressed disappointment at Christians who are asking whether God or Satan ruled the World,saying a believer should not be asking such, describing it as sacrilegious.

Dr. Akpabio said for a group like the International Network of Christian Students ( INOCS) to be asking such questions, suggests the
issue should be taken serious as it will mark the beginning of yet another phase of revival.

The Medical Practitioner who described himself as a widely traveled and highly experienced person said God is the ruler of His Universe.
He emphasised that Satan was just a creature of God hence, cannot be greater than the Creator.

Dr. Edmundson Akpabio intimated that God does not contend with anybody including Satan for supremacy or anything at that, describing God as sovereign and supreme.

He described Satan as a being who is just there to give God’s children troubles and problems to enable us look for God by going to Church, admitting that God recognizes Satan’s roles in our daily life.

Buttressing the points earlier established by Dr. Edmundson Akpabio, a member of INOCS Honorary Advisory Council and Head of Theatre Arts Department, University of Uyo, Professor Effiong Johnson, who started by saying such question as to who rules the World was uncalled for and begging the question, said he won’t as a panelist approved such topic for any academic research work.
Professor Johnson stressed that the book of Isaiah 14: 12 offers a clear insight of Satan the devil, listing out some of Satan’s names and attributes.
The University teacher said Satan, though not like God, was only always trying to be like the Most High God, calling him an embodiment of lies.

” Satan’s language is lies and the Bible says God is the Way, truth and life. So, there is no comparison between the two. Comparing the two is like comparing darkness and light.”

The University of Uyo Orator emphasized that God used His prerogative to create man by first creating a Garden for him, describing God as the Creator and Satan as a creature of God.

Professor Johnson maintained that God the Creator gives His children within His capacity while Satan, he said, was limited by God in every operation.
The University lecturer who further said Satan until today was still limited in everything of interest to God has reaffirmed that Satan takes orders from God, cannot make the day longer than God wants it to be hence, no basis for such comparison.
The guest discussant said Satan to any child of God was powerless, saying one could rid Satan’s of one’s grip, his or her background not withstanding.
He quizzed rhetorically, ” How there you compare my God with Satan ?” ” On what platform ?”

Professor Johnson described Satan as an illegitimate immigrant, urging Christian students not to let the devil speak last concerning them but should at all times counter his utterances concerning them, have faith and patient in order to obtain God’s promise.
Prayers, songs and clap offerings were offered to God by those who attended.