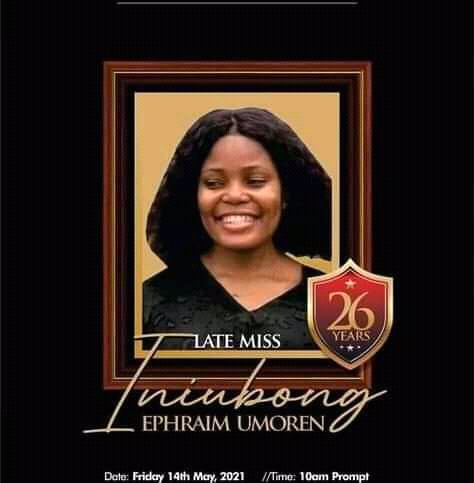 INIUBONG’S RAPE/MURDER: A TRIAL OF OUR COLLECTIVE CONSCIENCE

For sometime now, we, in the Committee For The Defence Of Human Rights, CDHR, Akwa Ibom State Branch, have watched with keen interest, and stoic calmness, the unfolding events surrounding the heartlessly wicked rape /murder of Miss Iniubong Umoren, a young female Philosophy graduate of the University of Uyo and a job seeker. Because of her desire to work she was raped and murdered by a mindless self confessed Uduak Ezekiel Akpan, a twenty year old young man. This is a sad reality of how debased our society has become.

The unfolding scenario as perceived by the Committee for the Defence of Human Rights, CDHR, is taking an uncomfortable twist that raises the suspicion of a cover up.

To start with, Miss Iniubong Umoren was killed in the course of seeking for a job which, obviously, is indicative that unemployment is at a breaking crescendo and morality at its lowest ebb in our undeniably lopsided society.
Perhaps, it has not been this bad in our chequered history.

One of the issues thrown up by the brutal rape/ murder of Miss Iniubong Umoren, is that the industrialization protegee of the present administration of Governor Udom Emmanuel, aimed at addressing the unemployment challenge in the State, is hardly enough to address the needs of our teeming unemployed youths in the State.

Therefore, holistic steps should be taken by Governments, both State and Federal to further address this issue, by employing more of our youths into the State and Federal Civil and Public service. That way, the rising tide of desperation and restiveness, occasioned by the stark economic realities on our unemployed youths would have been checkmated.

Meanwhile, the purported ban on employment should be lifted because it is observed that people related to politicians and other top notchers in government are being employed via recommendation almost on a daily basis, which makes this ban misleading, hypocritical and unpatriotic. This is not only injustice, but very oppressive and injurious to the collective wellbeing of ordinary people who may not be “this connected”.

CDHR strongly believes that it is nonsensical to keep placing the ban on employment when civil and public servants are retiring. We need not wait until another Iniubong is murdered on our Conscience before we employ their siblings.

Besides, soft loans through Micro finance banks could be given to entrepreneurs in order to encourage private sector growth and subsequent employment of youths. The private sector should also be encouraged by a ban placed on multiple taxation especially for market women and shop owners.

Moreover, the alleged connection of politicians and religious leaders with the self confessed rapist/ murderer, Uduak Ezekiel Akpan and the subsequent VIP treatment accorded the killer while he was being interviewed, leaves us with many unanswered questions.

For instance, the murderer claimed killing Miss Umoren was not intentional which is contrary to earlier report from his confessional statement to the Police. Howbeit, the police has equally insisted that there are no shallow graves in the compound but Iniubong’s body was exhumed there and there were evidences of shallow graves shown by reporters.

Consequently, this statement by the police as reported is at variance with the life scene report by a British Broadcasting Corporation (BBC) reporter. But the police argued they don’t base their investigation on media reports. Who do we believe?

CDHR will not accept any attempt to cover this heinous crime by whatever means or guise. Therefore, it is in the interest of the State government and the security agencies to acquit themselves creditably by ensuring that justice is not only done, but must be clearly seen to have been done in in this very sensational case.

CDHR strongly warns that any attempt to enthrone injustice with phony acts or occurrences will be vehemently resisted until justice is done.

Hence, if there are politicians or religious leaders, and indeed any other person(s) linked to the murderer in this infamous and unwholesome enterprise, CDHR unequivocally insists that they should and must be made to face the full weight and wrath of the law. Enough is enough! We are watching!