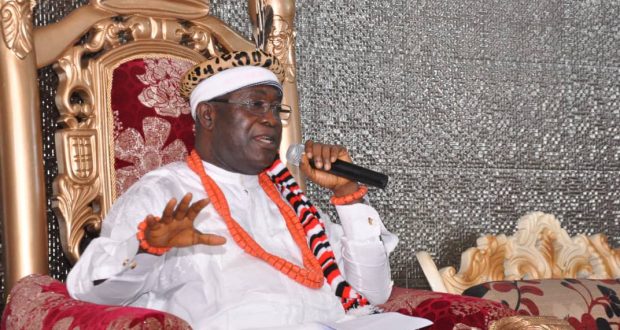 The Oku Ibom Ibibio, His Eminence, Nteyin Solomon Etuk, has charged mothers to use their positions to inculcate good moral virtues in their children.

The Royal Father who decried the high rate of cultism and petty crimes among youths, noted that mothers have a vital role to play in helping curtail the excesses of their wards.

Nteyin Etuk gave the charge on Thursday when the leadership and members of Esop Mbong Iban, Nsit Ubium local government area, paid him a courtesy visit in his Palace.

The monarch regretted that most children are stubborn, adding that they have also refused to go to school or learn skills in order to better their lives. He however urged members of Esop Mbong Iban to use the group to advance good courses and ideals that will help rouse their children into undertaking useful ventures that will shape their lives positively.

“Use this group to advice your children by encouraging them to avoid cultism and learn a trade so that they’ll have something to eat tomorrow.”

The Oku Ibom who doubles as the Paramount Ruler of Nsit Ubium local government area, told members of the body to identify children who are willing to either go to school or learn a skill and bring such children so that ways would be devised to encourage them.

He also called on them to form a corporative society where efforts can be made to have government support them with money so they can grow their businesses.

Speaking on behalf of Esop Mbong Iban, the leader of the group, Obonganwan Felicitas Usoro, thanked the monarch for his words of advice and for opening his doors for them to interact with him, describing it as a rare privilege.

She, on behalf of the organisation, congratulated Nteyin Etuk on his ascension to the Oku Ibom throne, while praying God to bless him with good health and long life.

The group, in a text read by one of her members, said the organisation which was formed in 2007 has suffered neglect from successive administrations.

They appealed to the Oku Ibom to help restore the place of the group in the state, given what they described as their immense contributions to the socio-economic activities in Nsit Ubium local government area.

While maintaining that they have always intervened on issues bordering on the wellbeing of the local government area, they also appealed to the monarch to assist them get a functional secretariat to help them function more effectively.

Responding, the Royal Father who said he recognises the existence of the group, promised to look into their demands and get the appropriate authorities informed of their concerns.

“I recognise the existence of this group; I’ll take your demands to the authorities and appeal that you be carried along in the state. But go and strengthen your ranks,” he charged them.

Previous: A’Ibom government to forge strong alliance with online publishers.
Next: Call to Service is a Challenging Assignment – Ekong Sampson