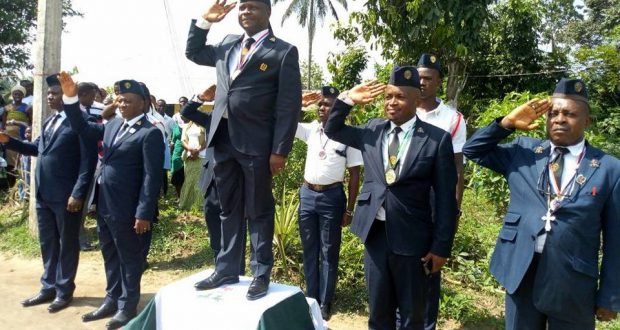 The formation which was at the instance of the Council Boss came after the two Battalions of the Boys Brigade in Uyo Local Government installed the Council Chairman as the Battalions Grand Patron.

It could be recalled that the Chairman had during his investiture as the Grand Patron of Uyo North and Uyo Batallion Council promised to see that a company of the Boys Brigade is established in his home town.

In keeping to his promise, the Chairman, last weekend, sponsored the camping and induction of over 100 boys and girls from his home church into the Boys Brigade. The inauguration and induction of the new members was performed by the Akwa Ibom State Council of the Boys Brigade led by the State Chairman who was represented by his Vice after 3 days of camping.

In a sermon taken from 2nd Timothy 2:1-7, Reverend Udeme Mbreide charge the new Brigadians to fight a good fight of faith as children of God, stressing that no Soldier of Christ can succeed while still living in sin.

He also urged them to take advantage of the Boys Brigade in promoting the image of the church positively with the community and beyond.

In his address, the Executive Chairman of Uyo Local Government who doubles as the Qua Iboe Church Committee Chairman in Nung Ukim Ikono thanked God for making his dream of fighting immorality and social vices among children and youth of his community a reality.

He said, the Boys Brigade is a good tool to use in fighting cultism, hence his commitment toward making sure it is spread across Uyo so as to be used in catching the children and youth to Christ while they are still young. He also commended the Akwa Ibom State Council of Boys Brigade for accepting to establish a company of Boys Brigade in Qua Iboe Church Nung Ukim Ikono upon his request on behalf of the church.

Speaking, the Chairman said by the establishment of the Boys Brigade, he has done what was left for him to do for his home church.

“This time, I am giving you Christ not material things. Before now I, together with my wife and family have tried our best to this church and the members in terms of material things and physical empowerment. What was left for me to do was to show you the way of Christ and help you to give Christ a permanent place in your life. That’s exactly what we are doing here today. Today, by the inauguration of Boys Brigade Company in this church, I have established a way through which all of you can can follow Christ and live a Christ-like. I am not giving you gun, I am not giving matchet or any weapon, therefore, today marks the last day I will pay attention to anyone who continue in an ungodly lifestyle. If you are caught in any unlawful act, I will never intervene because by the establishment of this Boys Brigade Company in Nung Ukim Ikono, I have given you a way out of criminal activities and legal prosecution. So my belief is that I have separated you from the world unto Chrsit and by so doing, I am happy because today I have already raised people that will dig my grave when I die without demanding for anything, I have raised people that will carry my corpse honourably. I have done what was left for me to do,” the Council Boss asserted.

While reminding the church of Samuel Bill’s last words, Elder Imoh Okon urged the new Brigadians to see themselves as those who will keep the light of the church burning in later days and to stick to the faith and doctrine of the church’s founding father. The inauguration service featured presentation of certificate of establishment to the church, induction and decoration of the Chaplain, captain and enrolment of 104 Brigadians. High point of the event was the inspection of guard of honour by the Council Chairman and parade by the Boys Brigade.

According to the Akwa Ibom State Council of the Boys Brigade, Qua Iboe Church Nung Ukim Ikono is the 14th company of the Boy’s Brigade in Akwa Ibom State and the first to be established under Uyo North Battalion Council.

It is rated the largest of the 14th Companies in Akwa Ibom State and the only company with all the members on proper uniform.