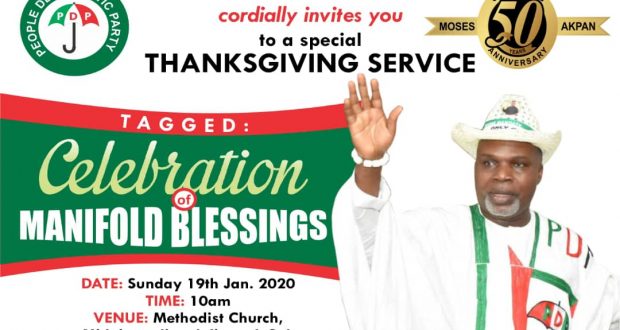 All is now set for the Thanksgiving service and celebration of 50th birthday anniversary of the PDP Chapter Chairman of Ikono local government Area, Chief (Barr) Moses Akpan, tagged CELEBRATION OF MANIFOLD BLESSINGS.

In a release made available to newsmen contained that, the legal luminary will also thanked God for successful and a fruitful union for over two decades as well as Governor Udom Emmanuel Victory at the Supreme Court. The event which is billed for Jaunuary 19th at Methodist Church, Mbiabong Ikon 1, Ikono LGA. is expected to bring eminent sons and daughters from Ikono extraction to appreciate God for His faithfulness upon the life of Chief Mose Akpan and family.

It is on record that during your days as a supervisor in the Council, you performed beyond and aboved the called of duty, always giving your best to served humanity, also right from assumption of office as the chapter chairman of our great party, you have walked tooth and nail to change the political landscape of Ikono with quintessential leadership qualities that have transformed the narrative of the cradle of Ibibio race.

As the chapter chairman of the party, your reign has brought unprecedented degrees of peace never experience in the history of Ikono, you have distinguish yourself from the few and have displayed an amalgam of humility, sincerity and honestly in every aspect of life, it is noted that your leadership have speaks volume that’s why the wheels of the party is running smoothly and bringing expected results to the people of Ikono .

Consequently, your dexterity an doggedness in few years in public domain have carve a niche for you which have been written in the sand of time, your open door policy according to friends and associates is second to none. Having served diligently at the local government level it is believed that God will elevate you to more prominent offices where you can touch lives as you so desire.

You have restored hope to the hopeless through your financial support scheme to students from Ikono extraction and beyond, I would therefore submit without reservation or fear of any contradiction that you are a God sent to the people of Ikono an a silent achiever with a heart of gold.