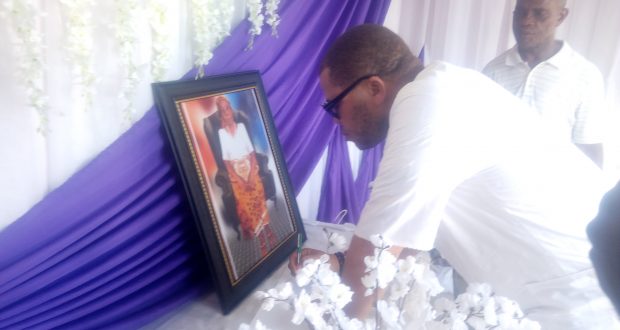 The State House of Assembly member representing the good people of Ikono in the Akwa Ibom State House of Assembly Hon. Asuquo Nana Udo who doubles as chairman house committee on Agriculture has consoled with Eng. Edem George Udousoro and the entire family over the demise of their late mother, madam Sarah George Udousoro .Hon. Nana today paid a condolence visit to the family of Eng. George to commiserate with them for the great lost, advice the family to accepte it as the will of God as their late mother leave a life worthy of emulation.

The lawmaker prays that the Almighty God will accept the soul of the departed matriarch believing that his legendary contributions to the development of Ukpa Itak community in teaching and leading the women folks will always be remembered by posterity, he pledge to supports the family record success at the funeral and appreciate Ukpa community for their collectively effort for him to emerged victorious at the poll, promised not to compromise with the future of Ikono but work with relevant authorities in bringing development to the Area. After a fruitful delibration with the family, the House member was among dignitaries that signed the condolence register.

Receiving the lawmaker, the Son Eng Edem George thanked the parlimentarian for identifying with the family during the moment of grief, described the late mother as a committed Christian with the heart of gold, who supported the family at all times and associated with all class of people. Eng. George appeal to the lawmaker to use his good office to attract a secondary school to the area as that will help the community feels his representation effectively. He used the occasion to invite members of the public to join him as the remains of late Sarah George will be committed to mother earth December 14th.