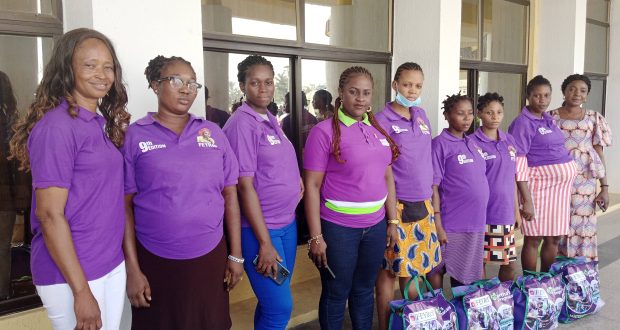 The wife of the Executive Chairman of Ikono local Government Area, Mrs. Oto-bong Nyakno Okoibu has described the pet project of her Excellency Dr. Martha Udom Emmanuel as people centric.

Speaking on the sideline of the event organised for pregnant women on Friday February, 18th 2022 at Ibom Hall, Uyo, Mrs Nyakno lauded Her Excellency on her programme, tagged “Martha’s Pregnacare Outreach” said it has showed genuine love, in the provision of medical care to pregnant women.

Mrs. Otobong described the Governor’s Wife who is also the progenitor of Family Empowerment and Youth Orientation Path Initiative (FEYReP) as a quintessential woman of substance, a paragon of womanhood, epitome of social justice and emancipation, symbol of unity and fountain of hope to Akwa Ibom women.

She explained that with the ‘FEYRep’ project of the First Lady, she has been able to reach out to the less privileged in numerous communities and had also initiated series of empowerment programmes and activities for Akwa Ibom women to benefit from.

“She is a kind mother, a mother that think so much about her people, through this pet project, she has given opportunity to so many Akwa Ibom women, by extension to us in Ikono, and I can boldly say that this can only come from a good mother.” Mrs Nyakno submitted.

Addressing the women, founder of FEYReP, Dr. Mrs. Martha Udom Emmanuel Emmanuel while giving a background on the outreach said: ” it became imperative to help educate and assist expectant mothers cope with the demands of pregnancy”.

She added that it is always very right to go for antenatal and seek proper medical attention regularly, stating that she wasn’t against the practice of traditional birth attendants, but was rather concerned about the procedure of delivery in those homes, because; “there have been unwarranted cases of deaths and transmission of deadly diseases in those places”.

The governor’s wife also took out time to educate the young women on hygiene and dieting during pregnancy, advising that they must eat well so their babies can as well eat well. While calling for exclusive breastfeeding of the babies, she as well placed premium on proper hygiene before, during and after childbirth.

Earlier in her address the Coordinator of FEYReP, Mrs. Ime Inyang, said the free Medicare, cash gift, and as well the maternity packs given to the women are all efforts geared at reducing infant morbidity and maternal mortality in the state. “This programme has been able to address the myths and facts of pregnancy.

At the event over 400 expectant mothers across the three Senatorial District were taken through free medical tests, treatment, health tips and hygiene. The women at the end of the outreach were also gifted free delivery packs with cash all courtesy of the governor’s wife.