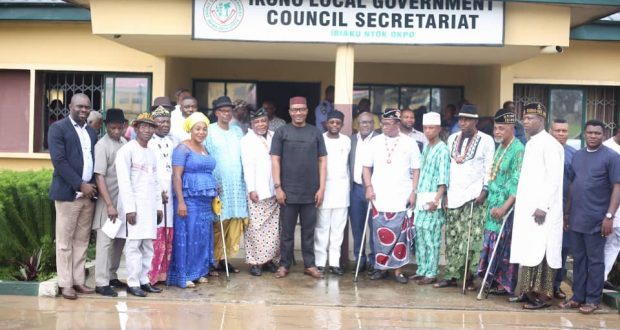 The Executive Chairman of Ikono Local Government Council, Hon. Itoro Columba has charged the Nigerian Prisons Service to back up their new nomenclature with adequate reforms to befit its status as a correctional facility. Columba gave the charge Monday, when he played host to the Ikot Ekpene Command of the Nigerian Prisons service now Nigerian Correctional Service in his office. The delegation was led by the Comptroller, Ikot Ekpene Prisons, Pat Chukwuemeka

The Comptroller in his address thanked the Chairman for making out time to attend to them despite his busy schedule. He stated that the utmost mandate of the Nigerian Correctional Service as a federal agency (as it is now called) is to transform lives. He said to make good their mandate, there was need to collaborate with people on ground and also reach out to the political leaders of the area in which they operate.

“Prisons as a social service agency is all about transforming lives and equipping inmates with life skills that will help them reintegrate themselves into society, There is no way you can succeed in whatever you’re doing without involving the host community, hence our visit”, he said.

Speaking further, Chukwuemeka said his team needed to acquaint the Chairman with their activities, relate their challenges and seek collaboration to discharge their duties effectively. He lamented the
upsurge in defilement and sexual assault describing it as an offence as severe as murder, hence the need for social reorientation at the grassroots. He reiterated his intention to put in place a practical roadmap on how to rehabilitate inmates while seeking collaboration with the council to expand the vocational school at the Ikot Ekpene prison.

In his response, the Council Boss, Hon Itoro Columba congratulated the group on their new nomenclature stating that the reformation of the prisons service goes beyond changing the nomenclature, adding that the correctional component of the prison service should be inherent. He lamented the situation where prison capacities nationwide are over stretched leaving so much to be desired while urging the Federal Government to deliberately and consciously follow up name change with commensurate reforms.

The Ikono Council Boss gave thumps up to Ikot Ekpene command of the correctional service for their intention to expand the scope of their skill acquisition programmes while stressing that his administration’s policy thrust was in sync with that as over 200 Ikono indigenes were presently undergoing training in several skill areas at the council headquarters.

“Having established partnership with you, we will leverage on that going forward. I therefore commend you for your contributions to bettering the society and pledge not to spare any support to the service”, he said

In his vote of thanks, Supervisor for Works and Transport in the council, Comrade John Bassey lauded the Ikot Ekpene Prisons service for deeming it fit to interface with the council. He assured the service of the partnership of the council urging them to feel free to interact with the Chairman as they had in him a man who is always ready to assist in every way possible.