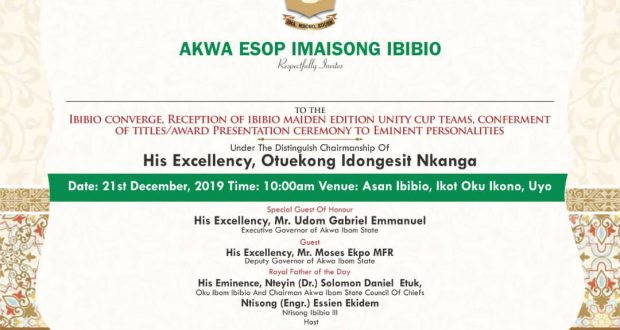 A former Governor of Akwa Ibom State, Otuekong Idongesit Nkanga has reiterated his commitment to the development of the Ibibio tribe and Akwa Ibom generally.

Nkanga stated this after a brief meeting at the Ntisong Ibibio’s Palace in Uyo, recently.

While addressing newsmen, he assured Akwa Ibomites of his full involvement in any bid that will bring about even development, unity and progress to the state.

Nkanga who expressed delight at the visit paid him by committee members of the Ibibio Unity Cup Competition in his house, assured them of Governor Emmanuel’s support for the Ibibio project.

“I was pleasantly surprised when the youths came to me this morning and told me about the unity match, I have given them my fullest support, I believe eventually if we need to mobilize people, this is one way we could do it to bring unity to our people and there is no way anybody can say no to unity”, he said.

“I want to believe that very soon we will restore Ibibio Unity that we had prior to 1929”, he recalled.

Giving the assurance of Governor Emmanuel’s support .
“I can always guarantee you the Governor will be part of the project”, he affirmed.

Otuekong Idongesit was unanimously nominated to Chair the upcoming Ibibio Converge coming up on Saturday, December 21.

The converge, among other things will feature award presentation to deserving Ibibio sons and daughters across the globe and presentation of Ibibio Unity Cup winning team to Governor Udom Emmanuel at Asan Ibibio.