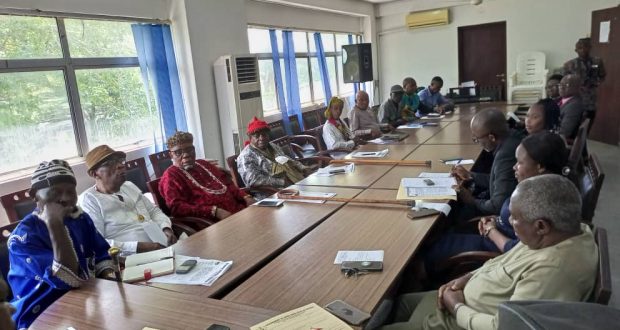 The Executive Council and members of Land Owners Development Association of the Victor Attah International Airport, on Wednesday, lauded the Akwa Ibom State Commissioner for Special Duties and Ibom Deep Seaport, Engr. Bassey Okon, Ph.D for his smooth sail in the ministry.

The Grand Patrons of the Association, made up of the Paramount Rulers of Nsit Atai, Edidem Peter Okon Effiong; Okobo, HRM Edidem Ita Okokon; and Uruan, HRM Edidem Cosmos Bassey Nkanga; made the commendation during a solidarity visit on the commissioner in his office.

Speaking further, the Paramount Ruler of Nsit Atai LGA, HRM Edidem Peter Effiong, on behalf of the visiting team, appreciated the Commissioner for his wisdom in addressing the complaints of the Airport host Communities, regarding their relationship with
management of the Airport and contractors handling various projects.

In address presented by the National Secretary of the Association, Chief Francis B. Ekpenyong, thanked Engr. Bassey Okon for running what they described as “open door administration” and promised the group’s continued support to Governor Udom Emmanuel’s led administration in the State.

Chief Ekpenyong listed some of the challenges the Association was facing with the management and contractors at the airport and solicited Commissioner’s intervention to resolve the issues.

Also speaking, the Commissioner for Housing, Otuekong Raphael Bassey who incidentally is the President of the Association, eulogized his colleague in the ministry of Special Duties and Ibom Deep Seaport, Engr. Bassey Okon for the attention and warm reception he accorded the Association.

Raphael Bassey added that, though he was the president of the Association, but he was at the meeting in an official capacity on the invitation of his Colleague to witness the visit.

He commended them for the peaceful and fatherly way of presenting their concerns and promised to mediate and reconcile parties in the Issues.

The Commissioner also seized the opportunity to appeal to the three royal fathers and other members of the Association to help in protecting facilities at the airport, to create room for more projects in their domains and the state in general.

He observed some ugly incidents within the airport to include: encroachment into government land, incessant burning of bush in the area, and stealing of properties in the airport.

Dr Bassey Okon charged the royal fathers to put some measures in place to ensure such anomalies are put on check.

Others in the visiting team were the National Vice President of the Association, Chief (Dr) Effiong Ukpong; the National Youth Leader, Comrade Francis Effiong, amongst others.

Meanwhile, the Permanent Secretary of the ministry, Engr. Udosen Ephraim, Directors and heads of departments were also present during the visit.