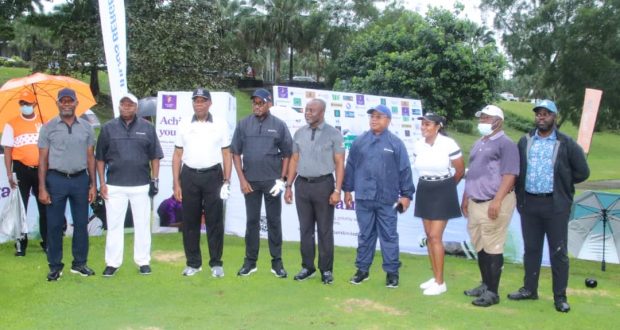 The tournament was hosted on Ibom golf course, a standard 18-holes course, which was built in 2007 along with the five-star Ibom Hotel.

200 golf players across the country competed in the tournament that had 32 trophies and other luxurious prizes.

Performing the tee-off on Saturday, Emmanuel Ekuwem, the secretary to Akwa Ibom State government, said that the state government will continue to partner with the club to ensure that the golf is developed and good enough to host international tournaments.

Mr Ekuwem, who spoke on behalf of the state governor, Udom Emmanuel, said that most tourists are usually surprised when they come into the state to see the magnificent golf course.

“As often as tourists come to Akwa Ibom, some who are golfers would scream and they would either say it’s insufficiently utilized or insufficiently marketed.

“The governor always says, when would Tiger Woods and all the big golfers of this world come to play so that we will brand and amplify the brand at home because this is our unique brand.

“We look forward to continuing this partnership between government and the club to make the golf course a good enough for international tournaments,” he said.

Mr Ekuwem commended the club for hosting the tournament, which he said will boost the state economically.

Nduneche Ezurike, group head, Strategic Brand Management and Communication, Polaris Bank, said that the bank took the lead sponsorship of the tournament because it is committed to tourism and sports development in the country.

Mr Ezurike, who spoke on behalf of the bank’s managing director, Innocent Ike, said that the bank was impressed with the outcome of the tournament, commending the organizers for projecting Polaris bank all through the tournament.

George Uresi, the chief operating officer of Ibom Airline, said that the airline was satisfied with its partnership with Ibom Golf Club on the tournament, saying that almost all the players who flew into the state used Ibom Air.

Mr Uresi, who further noted that there must be conscious efforts to continuously promote every Ibom brand, urged that the state should take advantage of the exposure the tournament has given and explore golf.

Charles Muia, the general manager of Ibom Icon Hotel, said that the partnership between the hotel and the golf course is mutually beneficial, adding that it contributes to the economy of the state.

Mr Muia noted that if tournaments like the just concluded governor’s cup are hosted at least three times every year, that the hotel will witness unprecedented economic boom.

Commenting on the tournament, some of the players expressed their satisfaction with the organisation and the outcome of the events.

They hailed Ibom golf course as one of the best in the continent, adding that the course is good enough to host international golf tournaments.

Umana Umana, the managing director of Oil and Gass Free Zone Authority, said he felt very fulfilled that he was part of the administration that built the golf course.

The former secretary to the state government said that the tournament was the best golf tournament he has competed in and commended the club for organizing it, saying the tournament would further project the course to the world.

“I feel fulfilled and and very proud today because I was part of the administration the had this vision and actualized it. I was the commissioner for Finance under former Governor Attah when he built this course.

“Many people did not see what he saw so they criticized him and said he was wasting money to come and built a golf course in a forest. But today, the course is driving tourism and the economy of the state,” he said.

On her part, Maryanne Udoka said that she was proud to be a golf player and would always seize every opportunity to advise other women to join the sport.

She noted that there are many health benefits in playing golf which he has experienced personally, adding that the tournament was a wonderful experience.

Responding, Usenobong Akpabio, the captain of Ibom Golf and Country Club, said that a facility like Ibom golf course can drive the tourism sector of the state.

Mr Akpabio said that the club is committed to developing and exposing the course to the global community through hosting big tournaments, adding that the club needs all the support it can get to keep maintaining the golf course.

On his part, the public relations officer of the club, Isuamfon Archibong, said that with the successful organization of the tournament and attendant economic drive, Ibom golf should be seen as the future of tourism in the state.

He said that through strategic partnerships, the club is planning to project the Ibom golf course to the world in order to make the facility globally known.

Highpoint of the even was the dinner/gala night and trophy presentation to the winners. At the end of the tournament, 32 trophies were won with other luxurious prizes.