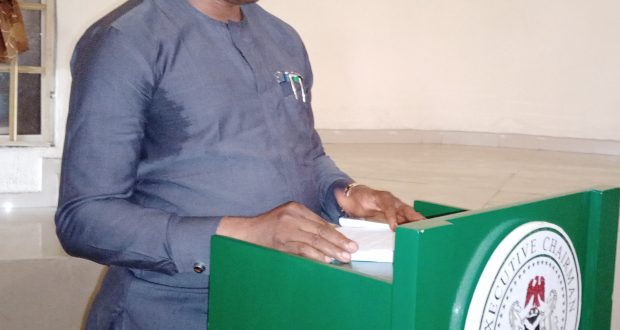 Speaking during presentation of the budget at the legislative chamber, in Oko Ita on Thursday, July 22, 2021. The chairman explained that the budget was aimed at actualising his desire to make Ibiono Ibom great, as its will unlock the economic potentials of the Area when funds will be release to key sectors of the economy.

He tendered an estimated draft of Two Billion,two hundred and fifty six million naira (N2.256.000,000), for the consideration and approval of the councillors.

Polycarp noted that despite the economic challenges, the council will ensured that monies receive from the federal allocation and internally generated revenue will be effectively utilised for the development of the area.

“It is worthy to note that the emergence of this administration on December, 2020 happily marked the turning point in the course of recreating a new Ibiono Ibom local government Area. This administration and government will show sincerity towards the development of the Area as evidence in the ongoing revolution. Core infrastructures have been established in the Area of roads, Youth development, renovation of offices among others.”

The council helmsman assured that no single project started by his administration will be abandon after his tenure. He however noted that strong fiscal regime where Internally Generated Revenue (IGR), will be significant to the development of the Area, to checkmate wastages and leakages there by adding value to money that will be generated.

In his response, Leader of the legislative council, Hon. Udeme Sunday commended the council chairman for his efforts in distributing democracy dividends equitably to all political wards and communities in the local government, within his few months in office.

Hon. Sunday who is representing the people of ward 9, assured the chairman that councilors will look into the budget, ask questions where necessary as well as give the budget speedy passage for the benefits of Ibiono Ibom residents on condition that he the Chairman must provide the house with a clear and detailed financial records of income and expenditure for 2020 budget, to enable them cross check progress made so far by the previous administration. The Lawmaker later oberverd a minute of silent in honor of late political leader, Hon Ntienyong Inyangme.

The Chairman was accompanied by the Vice Chairman, Hon. Nsikakabasi Ukobot, Head of service Dr. Mandu Ekpeyong, Secretary to the Council, Mrs. Mandu Esoh among other officers of the council.