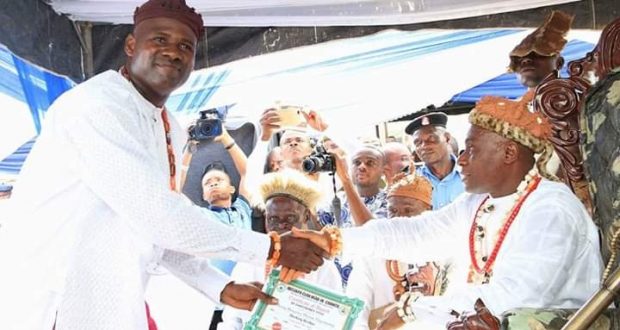 Ibesikpo Clan Council has conferred the title of “Otuekong Ibesikpo” on Mr. Kingsley Byron, an officer of the Nigerian Army.
Byron was honoured for his humanitarian services, particularly his contributions to the development of education in Ibesikpo Asutan Local Government Area. Conferring the title on Mr. Byron, the newly coronated clan head of Ibesikpo, Etebom Nsidibe Etuk, said the traditional institution under his watch will not hesitate to commend and reward people who make substantial contribution to the development of the clan.

Byron renovated a three classroom block at Comprehensive Secondary School, Ikot Akpaetok/Ediam, Ibesikpo after an April 13 windstorm sacked the entire school last year.
He also built a computer laboratory, stocked it with ten desktop computers and furniture, provided a 5kva generator to power the centre in the school, and instituted full  scholarship for students of the school who finish top in WASSCE. A citation of the honouree shows that outside Ibesikpo Asutan, Byron has undertaken many social interventions including the electrification of Ediene Ikot Obio Imo in Idoro, Uyo Local Government Area, and has given grants to students and traders, and other forms of assistance to less well-off women and children.
The well decorated army officer is a master of geoinformatics and cyber security and safety expert.
Byron said his motivation in taking on interventions in the education sector is because he places premium on education and desires to see students learn in a conducive environment.

“I renovated the school because of the love I have for education and my community. I know government is busy doing other things, so I had to assist the government so that the quality of education can improve”.
Besides the clan council, Mr. Byron’s contributions to educational development in Ibesikpo Asutan has been applauded by many.
Rose Ekwere Williams, who is the current principal of Comprehensive Secondary School Ikot Akpaetok/Ediam, said,  “Kingsley Byron Ekpenyong has deep interest in the less privileged children. He believes that among the less privileged class, there are great stars that need to be nurtured in a better learning environment”.
Last year, Mr. Kingsley Byron received three awards for his invaluable contributions to educational development.
The awards came from his school, Comprehensive Secondary School, Ikot Akpaetok/Ediam; Ibesikpo Asutan Local Government Council; and the Paramount Ruler of Ibesikpo Asutan, HRM Edidem Clement Francis  Ekpenyong.
One of the awards was presented to Byron by the Governor, His Excellency, Mr. Udom Emmanuel, represented by the   immediate past Commissioner for Education, Pastor Paul Udofia, at the handing over of the renovated classroom to the school.
2019-07-05
dozzier

Previous: Evacuate Your Abandoned Vehicles From The Road Or We Impound Them – Government
Next: RUGA: Okogie says Nigeria is now face-to-face with the truth