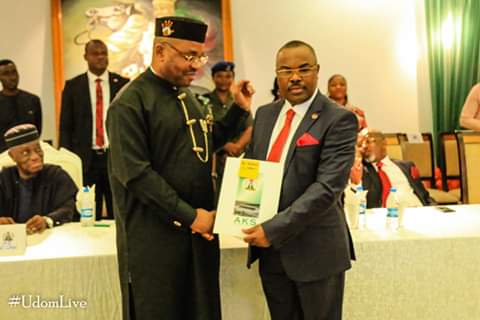 One of such commendation comes from the people of Ibesikpo Asutan local government area, who commended the governor for appointing their son, Mr. Nsikan Linus Nkan as the Commissioner for Finance.

The people of the area, led by the Paramount Ruler, His Royal Majesty, Edidem Francis Clement Ekpenyong at the reception organized to receive the commissioner poured encomium on the governor, describing him as a man of vision. The Paramount Ruler of Ibesikpo Asutan, his Royal Majesty, Edidem Francis Clement Ekpenyong thanked Governor Udom Emmanuel for finding an illustrious son of the area worthy to be part of his cabinet. The Royal Father described Mr. Nkan as a diligent and committed man that has distinguished himself in all areas of his endeavours.

Edidem Francis Ekpenyong blessed Mr. Nkan, asking God to grant him the grace to complete his assignment and finish strong.

According to him, “I thank governor Udom Emmanuel for appointing our son again as commissioner in his cabinet. The governor made no mistake in this appointment because Mr. Nsikan is a hardworking and committed young man, who is willing and reading to contribute in the development of the State. He is not new to the office, he was there and was not found wanting. Therefore we are certain that he will do more this time. We pray God to strengthen him and endue him with wisdom in his assignment”. The commissioner for finance, Mr Nsikan Nkan appreciated governor Udom Emmanuel for finding him worthy to be reappointed into the State Executive Council. He thanked the governor for the confidence reposed in him and promised to bring his experience to bear in the discharge of his duties.

At the reception were the chairman of Ibesikpo Asutan local government area, councilors from the area, royal fathers and many others.