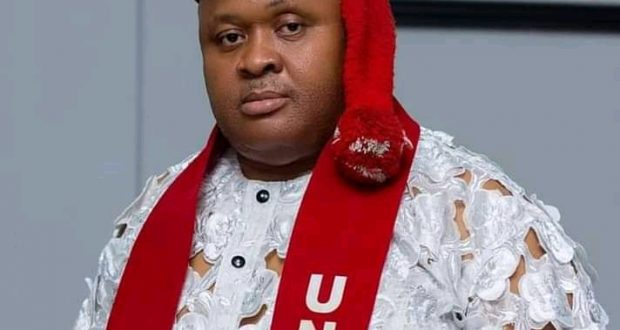 The Ibaka Deep Seaport struggle is an institutional and communal issue. It affects Oro ethnic nationality and Akwa Ibom State Government. It is not a personal matter. The Governor is complaining about certain actions taken by Oro people through a concerted effort to register their grievances about the attempted relocation of Ibaka Deep Seaport from the original location to a disputed area, which is still part of Oro land according to 1957 map.

In the light of the above, I have to consult properly with the heads of various institutions in Oro for a better result. I am very conscious of my strategic role as the chief spokesperson of Oro Nation and I can’t take this unique mandate of Oro people for granted. We must as a matter of necessity rise and address any matter affecting the Oro people in this critical period of Oro history. We have been doing this from inception of this administration, no matter whose ox is gored.

Posterity will judge us individually and collectively should we fail to take the bull by the horns and stand by Oro People to conquer these obstacles inflicted on us by agents of oppression. We are aware of the roles of certain elements among us who are trying to be more Catholic than the Pope, trading the fortunes of Oro People for their personal gains. It is very sure that the God of Oro people is watching us and shall reward all our efforts and actions and judge us accordingly.

It is said that what is worth doing is worth doing well. In other words, Oro Union is our revered institution founded by our forebearers over ninty six years ago to fight for the rights of Oro People.

The Union should be seen as a dependable bridge between the Oro People and the outside world. We should be courageous and fastidious in tackling all matters of public interest for a better result, since the Union is the last hope of the Oro People both at Home and in the Diaspora.

Consequently, there will be a strategic stakeholders meeting of the Oro people on Wednesday, the 29th September, 2021 at the Oro Civic Centre and a special general meeting of the Oron Union On the 2nd October, 2021 to ratify our decisions to move Oro forward.

It is incontestable fact that I have addressed the protracted issues of the purported relocation of the much touted Ibaka Deep Seaport, both in Oro Civic Centre with the IDSP Committee of the State Government and with our Governor in the Governor’s Lodge, Uyo.

This, I have done to the best of my ability and with every sincerety of purpose in line with the yearnings and aspirations of Oro People. In all these interactions, we are always relying on our Petition to the Governor as an Article of Faith and our technical input for the advancement of the project.

I acted in good faith when I insisted and persuaded Oro People in our global Special General Meeting (SGM) through zoom network to send the Petition firstly to the Governor to seek his fatherly consideration on Oro position and to resolve the matter amicably before involving any third party.

It is on record that Oro People resolved to give one month interval to allow the Governor enough time to study the Petition and react accordingly. Unfortunately, the expectation of Òrò People was not met.

We shall address the Press with all the facts and figures at our disposal after the Special General Meeting (SGM) on Saturday, the 2nd day of October, 2021 at the prestigious Oro Civic Centre. This is aimed at strengthening our position and to put the record straight on the Deep Seaport relocation debacle and other critical issues affecting Oro People.

I want to state emphatically that Oro People have never threatened any INVESTOR(S) nor have any ulterior motive to truncate this lofty and laudable project that will boost the economic potentials of Oro Nation as the host Community in Akwa Ibom State and Nigeria at large.

No serious INVESTOR(S) will hastily disengage from such a gigantic project on the strength of a mild Letter of Appeal from the host Community seeking the most suitable and cost-effective location with detailed technical inputs if their intention was genuine.

Due to our passion for this unique project that will bring succour to our people, we are highly worried about the withdrawal of the Federal Government from this important project and this should not be attributed to the well intended position of Oro People. There should be conscious effort to bring back the Federal Government to back up the project.

Critically, the original plan that was conceptualised by successive State Administrations was for the road to the Deap Seaport to traverse the Seaport in Ibaka through Oron, Okobo, Nsit Atai road, bringing the influence to empty in Uyo, which is our revered State Capital, before discharging to other parts of the Country and the outside World.

Regrettably, the current masterplan of the Deep Seaport which has a gateway through Ibeno will pass through Eket, Onna, East-West Road to Aba and Port Harcourt, bypassing Uyo, thereby diverting the direct economic impact of the Deep Seaport away from Oron the host Community and Uyo, the State Capital to other parts of Nigeria…

This will help to correct erroneous impressions created about the position of the Oro People in this regard. We shall therefore, publish the much touted Petition which has become a subject of controversy. The Petition is persuasive and appealing in nature, which is aimed at convincing the Governor to consider and see the dire need to revert to the original and preferred location, near the natural harbour with sustainable cost, as against the proposed DUGOUT PORT that will result in the creation of artificial OCEAN of (1km square), without any Environmental Impact Assessment (EIA).

The Petition also seeks to address the cost implications and environmental hazard of dumping of huge excavated sand and debris from the DUGOUT Areas on Oro Natural Harbour that can pose serious environmental challenges for future development of the area.

The Special General Meeting (SGM) shall also determine the date and the modus operandi of the long awaited visit to the proposed controversial site of the Deep Seaport to confirm the rightful position of our God’s given land and to identify our original boundary thereof, which was established by our forebearers before the skewed arrangement made by Brigadier-General U. J. Esuene’s Government and other successive Administrations in Akwa Ibom State.

It is sad to note that the skewed map which is a manifest error is still being used to suit their whims and caprices, and to deliberately deny the Oro People the ownership of a large landed area, some OIL WELLS and other mineral resources.

The Special General Meeting (SGM) will among other things have a critical look at the administrative high handedness, intimidation and unwarranted arrest of Oron People by the Rector of the Maritime Academy of Nigeria, Oron and other important issues of mutual interest.

We are conscious of the fact that Oro People are endangered species, constantly prone to attacks and always subjugated to incessant oppression by every Tom, Dick and Harry that have any opportunity to have dealings with Oro People or to superintend over any affair concerning Oro as an ethnic nationality.

It is pathetic to note that in some cases, these injustices are perpetrated against us in the midst of our enemies within, who are comfortably enmeshed with largess and gratification for themselves to the detriment of the collective interest of Oro People.

May I therefore use this medium to appeal to Oro People to remain calm and go about their normal businesses as law abiding citizens. It is our prayer that God of heaven will intervene in this precarious situation and provide solution to this avoidable crisis in no distant time.

In the same vein, I appeal to the entire Akwa Ibom people to show deep concern to the Plight of Oro as we’re still open to meaningful dialogue.