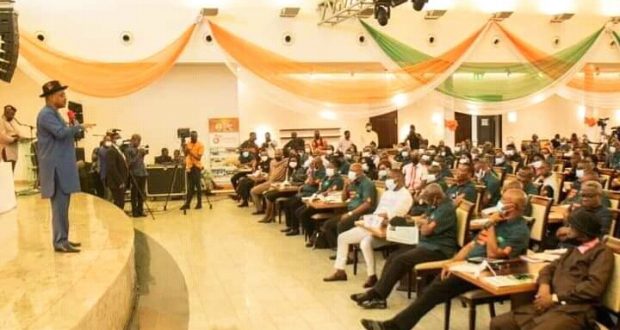 Akwa Ibom State Governor, Mr. Udom Emmanuel has informed that his administration runs the best open government in the Country, with accurate records of account.

The Governor made the disclosure when he hosted members of the fourth estate of the realm on a media parley led by the NUJ state Chairman Akwa Ibom State Council, Comr. Amos Etuk on Friday, June 11th at the Government House, Banquet Hall, Uyo.

Udom said his administration has performed 85 percent in the last six years as he has recorded applaudable strides since he took over as Governor in 2015, with people oriented projects, cutting across Education, Power, Aviation Agriculture, Transportation and Health with industrialisation given the topmost attention.

Giving Insight on how money is spent, the Chief Executive maintained that no one naira of Akwa Ibom money is spent on anything without the knowledge and approval from the Akwa Ibom State House of Assembly.

He called on Akwa Ibom people, most especially media professionals to join hands with him to build Akwa Ibom of our dream, devoid of sentiment and political difference, as no other people will do it for us if we fail to do same.

Speaking on projects, governor Emmanuel said that the Four point Sheraton hotel in Ikot Ekpene, is 99% completed, Smart building 100% completed, Eket Stadium almost ready for inauguration with state-of-the-art facilities. He maintained that the Ibom power plant in Ikot Abasi generates 150 megawatt of electricity, enough to supply at least 22 hour electricity to all parts of the State.

In his vote of thanks, the Chairman, Nigeria Union of Journalists,Akwa Ibom State Council, Comrade Amos Etuk, commended the sincere and committed efforts of the Governor in delivering quality dividends of democracy to Akwa Ibom people, most especially his Media-friendly disposition.

He explained that governor Udom Emmanuel is the best gift to Akwa Ibom people as the regular media chats which the governor has given members of the pen profession an opportunity to get first hand information about his developmental strides which according to him is seriously on course.

He assured the Governor that on behalf of the 620 registered member of the Union, of sustainable relationship in achieving his completion agenda with a promise to protect and project the image of the State to the global community.