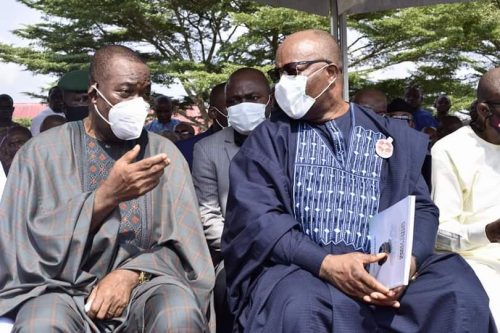 I PRAY GOD TO GIVE US ANOTHER GODSWILL AS GOVERNOR – AKPABIO

The Minister of Niger Delta Affairs, Senator Godswill Akpabio has said that his prayer has always been that God should give Akwa Ibom State another person that will resemble him to ensure rapid development in the state and the improvement of the living conditions of the people.

Akpabio made the statement while addressing relatives and sympathizers at the burial of two brothers, Dr. Ime Titus Okopido, a former Minister of State in the Ministry of Environment, and Hon. Ini Titus Okopido, who until his death was the Akwa Ibom State Chairman of All Progressives Congress (APC).

The Minister posited that ”Governance was like a building block, when one takes it to a level, another who succeeds him has to take it further”, noting that when that is not done, the society would suffer for it.

Akpabio described the loss of the two brothers as a painful incident, and prayed God to console and protect the families left behind.

The funeral was attended by dignitaries across the State, including members of PDP as well as APC.