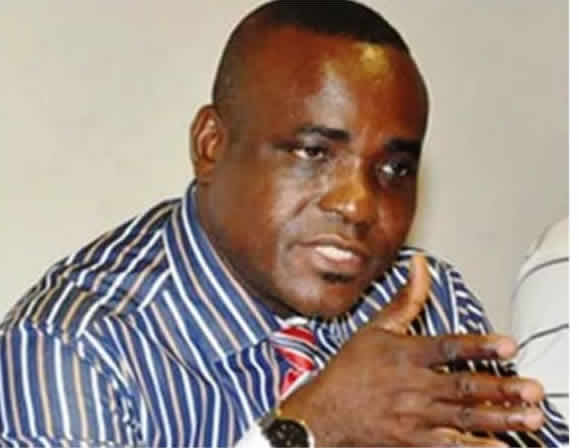 Senator Ita Enang has dispelled speculations making rounds that he has been sacked by President Muhammadu Buhari.

The PREMIUM TIMES, a reputable online newspaper, broke the news on Monday that Enang, a Senator from Akwa Ibom State, has been dropped by the President as Senior Special Assistant to the President on National Assembly (Senate).

According to a source close to the Presidency, the online newspaper was said to be told on Sunday evening, that President Buhari has dropped Enang whom he appointed in 2015.

However, Enang in an interview with Planet FM, Uyo on Tuesday, August 13, confirmed that he was still the Presidential Liaison Officer to the President contrary to rumours in various quarters about his sack.

Speaking under Politics Today programme, he said he did not oppose the ownership of cattle by Akwa Ibom people after all, “the richest people in the Bible were cattle owners.”

The Senator said he did not support herdsmen trespassing into the farms of other people, advising owners of cows to establish ranches.

On the budget of N2.2 billion for RUGA settlement by the Federal Government, he confirmed that there was a provision of the sum in 2019 budget contrary to refutal by some Senators that there is no provision for the programme.

Meanwhile, the leadership of the Senate, Sunday, challenged Ita Enang, to show Nigerians where the amount he claimed was appropriated for the Rural Grazing Area programme was inserted in the 2019 budget.

The leadership of the upper chamber said it scrutinised the current national fiscal document to authenticate the claims of the presidential liaison officer but found no amount meant for the implementation of Ruga programme in the 2019 budget.

But the Senate Leader, Senator Yahaya Abdullahi, told one of our correspondents in a telephone interview that no such money was voted for the implementation of Ruga in the 2019 budget. He challenged Enang to prove him wrong.

Abdullahi said, “We have gone through the 2019 budget critically and we did not come across any money that was voted for Ruga programme implementation there. Let Senator Ita Enang prove us wrong, then we will take the issue up from there.

“He who alleges must prove,” the Senate Leader added.

Also, Senator Enyinnaya Abaribe, the Minority Leader of the Senate, in a separate interview with one of our correspondents, assured Nigerians that necessary legislative actions would be taken on the issue when the federal lawmakers resume from their recess in September.

Abaribe also said investigation carried out by him on the issue had revealed that the N2.258 billion Ruga fund might not have been specifically captured in the 2019 Federal Government budget.

“I asked him where in the 2019 budget that money is. I also asked him why he would say states in the southern part of the country should support the programme and even provide land for the project and he (Enang) said he never said so.

“I don’t think that we can make further comments on a pronouncement that has been denied. For us, I don’t think any such thing was in the budget. I will have to go through the budget again and check properly.

“However, if such a thing comes up in the course of my findings, then we would do the needful. The Senate will certainly not be a part of anything that will cause disruption of peace and problems within the country.”

The Chairman, Senate Committee on Media and Public Affairs, Senator Adedayo Adeyeye, told one of our correspondents that no matter could be discussed until the members resume from their annual recess.

He said, “When we resume from recess, we will look at all the issues that cropped up while we were on recess and attend to them. The Senate has not taken any decision yet on the issue.

Previous: Any Governor Who Can’t Develop His State With The Available Resources Is Displaying His Incompetence……Obong Attah blows hot.
Next: Hon. Emmanuel Boniface an Erudite Administrator Par Excellence.