Breaking News
Home / Breaking News / How Notorious Kidnapper, Evans Was Caught Like A Chicken After Seven Years Of Hiding 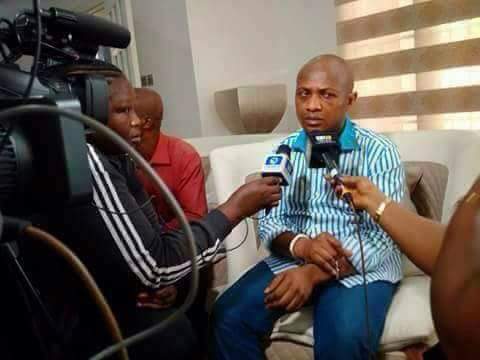 How Notorious Kidnapper, Evans Was Caught Like A Chicken After Seven Years Of Hiding

There was tumultuous ovation and excitement, yesterday, at the Force Headquarters,  Abuja, and the Police Command, Ikeja, Lagos, after news filtered that the notorious and most dreaded kidnap kingpin in the country, Evans, has been arrested by the Inspector-General of Police Intelligence Response Team, IRT, inside his bedroom, in the Magodo area of Lagos.
Evans, described as the most notorious, high profile kidnapper – and the richest in Nigeria – was, at last, unmasked. Before yesterday’s arrest, the Police had placed a N30 million bounty on his head. When Policemen broke into his room to arrest him, he was said to have sheepishly said, “I know this is the end, I am finished”.
His real name is Chukwudidumeme Onuamadike, aged 36, and hails from Umudim Village, Nnewi   North Local Government Area of Anambra State. It vwas gathered that during preliminary questioning, Evans confessed to having been behind virtually all the high profile kidnap incidents in places including but not limited to Lagos, Port Harcourt, Onitsha, Aba. His exploits also included the 2013 attempted kidnapping of the owner of The Young Shall Grow Motors.   He was said to have confessed that the kidnap job was brought to him by one Emeka. He also confessed that he has two properties in Ghana, one of which is where his wife and five children have reportedly moved into.
Among many items recovered from him  yesterday  during his arrest were expensive phones, one of which is put at a cost of $6,000. His arrest yesterday, came just few weeks after many members of his gang, including his second and third in command, were rounded up at different locations in the country. Their arrest came few days after one of their victims,  Donatus Dunu,  a wealthy owner of a pharmaceutical company at Ilupeju, Lagos, escaped miraculously from the hideout where they kept him for months. He was abducted in front of his office in Ilupeju, on February 14, 2017, after he closed for the day, by gun-toting young men who blocked his car with their SUV and threw him into the booth of the car. Members of his family later paid about N150m to effect his release. But the kidnappers insisted on getting N500m.   They threatened to kill their victim if the full ransom was not paid. Luckily,   few weeks after the payment of the ransom and their consistent threat to kill their victim, Dunu miraculously escaped from their hideout at Igando, a suburb of Lagos. He, thereafter, alerted security agents who swung into action and started rounding up members of the gang.
information by very dependable sources suggested that efforts of the police paid off on  Friday  night, after they were able to locate Evans’ whereabout, using sophisticated communication gadgets provided by the Inspector-General of Police.
Police sources hinted that while almost all police formations in the country were on red alert trying to locate the notorious kidnap kingpin, the Inspector-General of Police, who was visibly angry with the delay, sent three special teams attached to his office down to Lagos to complement the efforts of those on ground. It was further gathered that the teams arrived with new sophisticated communication gadgets for the operation.
Intelligence reports had indicated that failure to arrest the Evans was not unconnected with his possession of some state of the art jamming device, which made it easy for him to serially knock off signals that would have enabled men of the force pin him down. The change in equipment, according to sources, paid off at last, after detectives were able to locate his where about late  Friday  night even though his telephone sets were already switched off to avoid detection. He was reportedly traced to his palatial home in Magodo, Lagos, while he had already packed his bags and baggage’s, ready to fly to South Africa, the next day.
It was gathered that after his arrest, the elated members of the IGP’s team, led by Deputy Superintendent of Police, Philip, immediately alerted their leader, ACP Aba Kyari, who gave the Inspector-General the cheering news.
In Lagos, officers and men of other formations, including civilians, rushed to catch a glimpse of the dare-devil kidnapper that gave them sleepless nights.    It was learned that people even came from far-away Festac and Amuwo-Odofin/Ojo axis where he held sway during his inglorious reign by abducting wealthy men and forcing them to pay not less than N500m before they were set free.    As at the time of going to press, detectives were yet to give access to the suspect but a police source said he may be paraded by the state Commissioner of Police, Fatai Owoseni, today.
His gang members…. 1. CHUKWUDI DUMEME ONUAMADIKE a.k.a EVANS
2. NWOSU CHIKODI CHUKWUMA AKA SUDO 42YRS, 3RD IN COMMAND
3. SUOYO PAUL AKA NWANA 42YRS
4. FELIX CHINEMEREM 36YRS
5. IKENNA EMEKA 28YRS
6. UCHECHUKWU AMADI
7. OGECHI AMADI
ARMS AND AMMUNITIONS RECOVERED
(i) FIVE (5) AK 47 RIFLES
(ii) ONE (1) AK-49 RIFLE
(iii) TWO (2) DOUBLE BARREL LONG
(iv) TWO ‘2’ ENGLISH PISTOLS
(v) FIFTY-NINE (59) AK-47 MAGAZINE WITH AMMUNITION
(vi) ONE THOUSAND TWO HUNDRED AND SEVENTY TWO (1,272) LIVE AMMUNITION OF AK-47 (9mm)
(vii) FIVE (5) DIFFERENT PLATE NUMBERS
(viii) Other weapons are being recovered as I speak with you from different criminal hideouts of the different states.
After anintense gun battle between that lasted several hours, CHUKWUDI DUMEME ONUAMADIKE and his gang were overpowered by the Superior Fire Power of the Joint Special Forces and he was arrested at MAGODO ESTATE, IKEJA AREA OF LAGOS STATE.
CHUKWUDI DUMEME ONUAMADIKE a.k.a EVANS was first declared wanted in August, 2013 when he masterminded the attempted kidnap of CHIEF VINCENT OBIANUDO, the owner of Young Shall Grow Motors in Festac, Lagos, where a Policeman attached to the victim foiled the attack and killed three ‘3’ of Evans gang members but also lost his life in the process. Some of Evans gang members were subsequently arrested, but he regrouped after with several gangs and became more vicious and unleashes terror in the mentioned States of the Federation.
EVANS and his gangs keep their victim kidnapped in Lagos Area at House No. 21 Prophet Asaye Close New Igando, Lagos State until the ransom is paid to him. Ransom money are paid to him in Millions of Dollars, some victims are kept for upward of six to seven months until the last penny is paid. He never reduces his tagged ransom money. None of his gang members know his house.
MODUS OPERADI OF EVANS
In every kidnap attack he has a separate armed group that kidnapped victim with him and has another armed group who takes over the victim to their hideouts and prevent them from escaping. The members of the two ‘2’ groups don’t know each other. They complied with Evans instructions.
EVANS, and the dreaded vampire who died during a gun duel with the Police Special Forces led by IRT and Imo State Police Command in a forest in River State early this year are axis of evil in kidnappings in Southern Nigeria States and some Northern State. Thisis a huge success for the Nigeria Police Force. The Force will build on this success and continue to prevent kidnap cases and criminality generally in the country, and ensure prompt detection of those crimes that cannot be prevented, and also ensure that perpetrators are arrested, investigated and prosecuted.
PROPERTIES OWNS BY CHUKWUDI DUMEME ONUAMADIKE a.k.a EVANS: He has two (2) Mansions in Magodo GRA Phase 2 worth about three million naira (N300,000,000). He also has two (2) House in the Highbrow area of Accra City in Ghana among many other properties such as exotic cars, expensive watches, Jewelries e.t.c, he bought from the ransom.
His Exploits
1 Mbarikatta William Uboma, 35, kidnapped June 16th, 2012, at about  11am,  on his arrival from Hungary, while he was close to his house.  He was in the company of his brother, on their way from the airport, when another car emerged and blocked theirs. They grabbed Uboma, blindfolded him and forcefully abducted him – he was taken to an unknown destination. They later demanded a ransom of N10M. However, N2M was later paid while they collected other personal accessories. He was finally dropped at Okota on the third day.
2. Paul Cole, 34, from Ohafia in Abia State. A Director with Ocean Glory Commodities, Apapa, he was kidnapped on August 3rd, 2012, at Festac Town, together with his General Manager, Jude Ugoje, and another staff, Piriye Gogo, and taken to an unknown destination. They demanded for N10M. On August 6th, 2012, they collected N5M ransom at Maza-maza, before letting  their victim off the hook.
3. Mohammed Jamal, 22, a Lebanese, was kidnapped on August 19, 2012, at Ajah by three armed men, taken away and blindfolded. N7M ransom was later paid at Ojo Barracks.
4. Kingsley Nwokenta, 34, was kidnapped on September 19, 2012,  at Mile two under bridge,  after he left Lebanana Bar, in Festac. Later, he paid N1.5M ransom while they made away with his black Toyota Venza and other accessories.
5. Anthony Ozoanidobi, 41, was kidnapped on October 10th, 2012, along Marwa Road Satellite town. Ransom of N1.5M was paid after which he was released at Apple junction, Amuwo-Odofin
6. Leo Abraham 58, was Kidnapped on August 20, 2012.  He paid ransom of N5M and was later released along Badagry road, Lagos.
7. Ojukwu Cosmas, 45, sells Toyota parts at Aspanda Trade fair. He was kidnapped on January 21, 2016, at Festac town. It was not clear when and how he was released.
8. James Uduji was kidnapped close to his house at 7th Avenue, Festac Town, late last year. Held for 6 six weeks. He paid a ransom of $1M.
9. Chief Raymond Okoye – Odu-Na-Ichida. He was kidnapped in 2015. He also paid $1M as ransom, after being held captive for 2months
10. Uche Okoroafor, a trader at Alaba, was kidnapped in 2015, and held captive for three months.  He also parted with $1M.
11. Elias Ukachukwu was kidnapped in November 2015. He, too, paid $1M.  The date of his release could not be ascertained but it was gathered that his abductors were insisting on another $1M ransom, claiming family members were rude to them during negotiation.
12 Francis Umeh, also a spare parts dealer at Aspanda, was kidnapped in July 2016, at Raji Rasaki Estate. Released after two months in captivity.
2017-06-15
dozzier