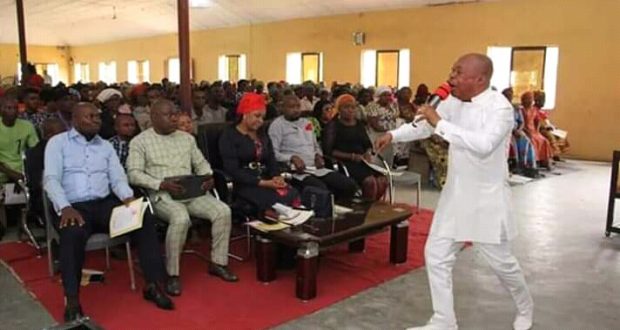 Speaking to journalists at the heels of the thanksgiving service at the Apostolic Church, Odot 3 in Nsit Atai, Hon. Etim said that Hon. Emem Ibanga had toed the right path by starting the new year with God. He stressed that for that reason, God would shine His face upon the people of Nsit Atai.

The Councillor used that opportunity to applaud Governor Udom Emmanuel on his developmental strides having seen tremendous developments especially in the area of industrialization and appreciated the governor for his prudent utilization of the State resources. According to Hon. Etim, “Nsit Atai has benefited from the government of Mr. Udom Emmanuel. The road linking Ibesikpo Asutan to Odot, our headquarters, was done by Udom’s administration. And, that automatically links Nsit Atai to Uyo, Victor Attah International Airport and to Eket on tarred roads.” Presently, the Ekpene Ukim-Nsit Atai-Okobo Road is under construction and this will add to the gains of this local government from Governor Udom’s administration.”

Also answering questions from the journalist, Hon. Etim described the recent Supreme Court judgment in favour of Senator Hope Uzodima of the All Progressive Congress as a confusion to fairness in the sense that the fourth was declared the first.

The solemn assembly with the theme: “Thank You, Lord” extracted from Psalms 107:1-8, featured songs, admonition and prayers to usher in the new year and attracted sons and daughters of Nsit Atai among whom were the Chairman of the Local Government Area, Hon. Emem Ibanga, the Vice Chairman, Hon. Idorenyin Inyang, the Leader of Nsit Atai Legislature, Hon. Ben Ben, the former Chairman of the local government and former Commissioner, Hon. Lawrence Udosen, the PDP chapter Chairman, Egr. Chrisantus Okon, Councillors, Supervisors, traditional chiefs, clergies and other notable citizens of the area.