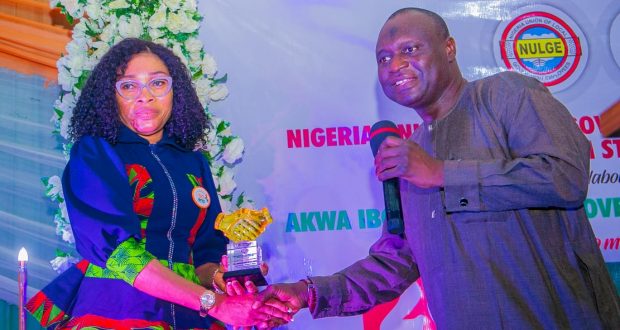 Hon Bassey was honoured with the NULGE Friendly Award on Thursday at the gala/awards night as part of the activities marking the 2022 Local Government Workers Week.

She disclosed that all the achievements recorded in local government under her tenure were possible due the massive cooperation of the workers and assured that she will continue to maintain good partnership with the workers.

“I have been in this acting capacity for eight months to the glory of God. I thank God for what He has used me to do in Mkpat Enin.

“Within these eight months, it has been a friendly jolly journey with NULGE. It’s been a family affair and more than an official thing,” she said.

Hon Bassey noted that the award will inspire her to do more for Mkpat Enin Local Government and equally strengthen her bond with members of NULGE in the local government and state at large.

She further congratulated Akwa Ibom NULGE on the successful event and particularly commended the State President of the Union, Comrade Anestina Iweh for her innovative, purpose-driven and sterling leadership.

Hon Bassey is among the Nigerian local government chairmen who will be receiving the 2022 Nigerian Local Government Chairmen Merit Award (LOGMA) later this month in Abuja.