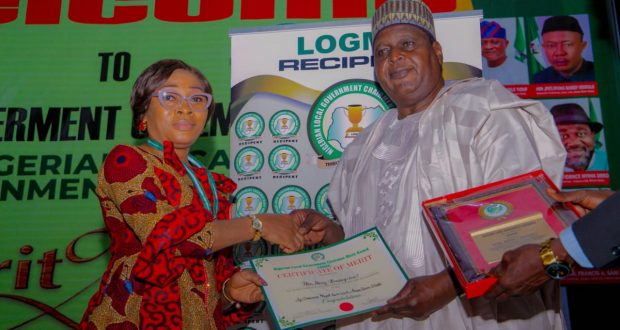 Hon Bassey was among the 28 local government chairmen who were honoured with the national award on Thursday during the conferment ceremony at the National Merit House, Maitama, Abuja.

Addressing some indigenes of Mkpat Enin shortly after receiving the award, Lady Bassey said that it was a national honour for Mkpat Enin to be among the 28 local government areas selected out of the 774 in the country for the award.

“This award is only bearing my name, but this is for Mkpat Enin. While seated in that hall, all I heard was Mkpat Enin so through this award, Mkpat Enin has become a national treasure.

“There are 774 local government areas in Nigeria but only about 28 were selected for this honour and Mkpat Enin has featured prominently. Together, we have taken Mkpat Enin to the national level,” she said.

She noted that the recognition was only possible because her administration has enjoyed the support and cooperation of the staff of Mkpat Enin council, members of her executive council, the legislative arm and the entire Mkpat Enin people.

The Acting Chairman thanked the governor of Akwa Ibom State, Mr Udom Emmanuel and wife, Mrs Martha Udom Emmanuel for opening the door for more women to be involved in governance, adding that she is a beneficiary of their kind gesture.

Along with other recipients, Hon Bassey was decorated and presented with the award by the Director General, National Council for Arts and Culture, Otunba Olusegun Runsewe.

Previous: UYO LOCAL GOVERNMENT ASSURES SUSTAINED INVESTMENT IN EDUCATION
Next: The Gift of Leadership is In my Blood~ Evangelist Isang Sam Udo