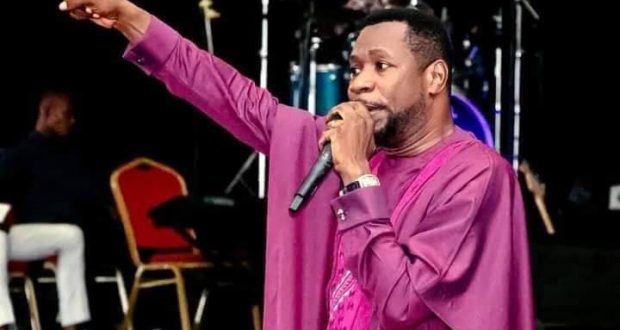 …Sons of Faith Emerges, Insists on Homegrown Governor, Says Decisions of Fathers of Faith not Binding

… Fathers of Faith Must Give way- Nyeneime Andy Declares

…The Story of Blackmail Among Spiritual Fathers

.
All is not well within the ranks of spiritual fathers in Akwa Ibom State, this TheMail Newspaper can report.

In an interview with newsmen on Monday, July 19, 2021, the Presiding Pastor of Holy Ghost Ambassadors Ministry, Apostle Nyeneime Andy disclosed that currently there is a big crack within the ranks of spiritual fathers in the state.

He said the crack is because of political interest of 2023 gubernatorial election in Akwa Ibom State. The clergy said the division within the church is caused by a pastor who neither hails nor operates from the State but is favoured at the Hiltop mansion to come in from his base.

Although Andy did not disclose the name of the said pastor, he noted that the pastor has used blackmail, his connections with the authorities in the State and money to divide the spiritual fathers in the State.

The Holy Ghost Ambassadors’ Clergy noted ” There are certain pastors who are not residents in Akwa Ibom State, who now parade themselves as God. They say some persons in government only listen to them. In fact, some people in government don’t listen to any pastor from Akwa Ibom. It is an error. If there’s no one that will speak up, I stand as Jeremiah of my time that this error must be corrected.

“No pastor from Lagos or Abuja has the right to chose or control what we do in Akwa Ibom State politically. They should come for evangelism, we won’t complain.

” He shouldn’t come and say he wants to chose the governor of Akwa Ibom State. Not when we have fathers of Faith and sons of faith. God is not an author of confusion. God did not take a prophet elsewhere to rescue the children of Israel. He raised a prophet amongst the people. So, we are asking those parading themselves as pastors and General Overseers to go to their own State and raise a governor.”

Andy noted that as Pastors who stay in the State, they are better equipped to understand the problems and pains of the people thus have the duty to chose who can better serve as Governor.

While explaining that the foreign pastor has used blackmail and gossip to divide the church, he said ” To be honest, there is division in the church caused by foreigners. Before now, there was nothing like fathers of Faith. That started just few years back. This so called pastor is trying to make our fathers knock their heads. I can tell you 5 different groups have emerged because of this man. He is calling pastor A to fight Pastor B. That is not how Akwa Ibom used to be.

“The present situation is that people are running spiritual things based on personal interest. The Interest of the state must be paramount. The spiritual leaders are comfortable to serve in the role of house boys to the foreign pastor. Some pastors feel privileged to be introduced to certain people. And it is because of some certain peanuts they come to present to them.”

Andy who said he considers it a duty, himself among others who may be referred to as sons of faith with other concerned leaders and pastors not to be quiet or turn blind eyes for a certain group of people to turn the church upside down.

He noted that when the time is ripe, he will write to the leadership of Christian Association of Nigeria (CAN)and Pentecostal Fellowship of Nigeria (PFN) to talk to the said Pastor but stressed that If he resist, they will know what next to do.

The Presiding Pastor offered insight to the fact that Sons of Faith have emerged in the State. He said this set of faith leaders are senior mature clergymen whose identity will be unveiled in the near future.

While stressing that it is time for fathers of faith to give way for younger but matured pastors to lead the way towards 2023 gubernatorial election, he added ” In every church denomination today, certain people at certain age are retired especially when they get to 70 or 75. It doesn’t mean they push them out of the church. They are still anointed but their strength determines the output.

“If you look at our fathers of Faith, most of us have worked with them or serve them in many years. I believe that every Moses must raise a Joshua. Every Elijah must have Elisha. This is because there must be a succession plan. We believe that come 2023, fathers of faith should play advisory role and mentorship. They should allow the sons they have raised over time possibly in place of prayer chose the next Governor of this State because they are sound mentally, physically and spiritually.

” Every Timothy that was raised by Paul, he must trust him. Paul’s duty is not just to preach the gospel but also raise sons who will take over the Ministry.

“We also believe politically our fathers should allow the next generation a decision to take. Their role is to advise what I call sons of faith since there is fathers of Faith. When Eli’s eyes were dim, he didn’t die. God raised Samuel and I believe it is time for Samuel to rise. You know why? Eli did not anoint the next king of Israel. It is Samuel that did. I’m calling on our fathers of faith after training most of the sons of faith, to trust us and allow us to take the decision of who becomes the next Governor of Akwa Ibom.”

Andy said the choice of Governor in 2023 must be a homegrown person who has experienced and understands the challenges of the State.

He said anyone chosen across the political parties in the State must be someone who is known to have made some sacrifices in politics and the State hence can relate effectively with the grassroots.

“In 2023, it will be a government of the people, for the people and by the people. We will not allow one person to choose a governor for a state of over 6 million people.

” It is time for us to step up and play a major role. The choice of Governor will not be someone that appears from the moon. Someone who has not been in this State and has felt the pain. We will not agree to anyone. When people are hungry and people who don’t stay around them come, they won’t know why they are hungry. They will feel they are lazy.

“Anyone chosen in any Political party, he must be known for the sacrifices he has done. If you allow someone who just joined the party on the name of I have been there before to take over, you’ll be the first people that will suffer. We need someone who has been in the State and has contributed to the growth of the party. We need a homegrown person.”

The Holy Ghost Ambassadors’ Presiding Pastor said if the above demands are not met, there is going to be a third force that will rise with the goal of producing a governor of the people.

” If they ignore this, there will be a third force. We will sign and say in the name of Jesus, a governor of the people must be raised. We will prayerfully ask God to guide the two major parties although there is going to be a third force in case they don’t give us who we want.

“2023 will not be about party but interest. We will Ignore party and play the interest of the person we believe is going to lead us to the glory of God. The role of every citizens must be emphasized. The last election, less than a million people voted. What happened to the other people? More than 3 millions people are eligible to vote.”

He called on the youths to rise to the position of leadership and ignore the temporary pleasure of serving as PAs and SAs.

Andy added ” There is time for everything. The mistake of leadership is when your time expires but you still hang around. When it was Elisha’s time to reign, God told Elijah to leave. When Jesus arrived, the Ministry of John the Baptist finished but he hanged around and you know what happened. God has a season for every Minister to manifest.

“God is going to speak to all of us not through one person. If you see the role of fathers of faith, they are standing as if God speaks only through them. But the forefront of the issue should be handled by the sons of faith. When we say sons of faith, we are not talking about children but senior mature pastors.

” In 2023, God will speak and all will align through all of us. When it comes to real standing in front, the fathers should know that it is now time for Daniel. Eli do not speak when Samuel is speaking.

“God is going to use a younger generation of pastors to affirm and confirm with the advise of some fathers of faith. But to say fathers of faith are going to take a decision this time, I bet you, it will not be binding because they have to align with sons of faith. In due time we will reveal members of son of faith. God will speak to all and we will all come together. For a certain group to alienate the other, it won’t happen this time.

While congratulating Governor Emmanuel on the completion of the Ikot Oku Ikono flyover, Andy advised that while building physical infrastructures, the Governor should not lose focus on human development because the people need strength to flyover the bridge.

Previous: Who Is Obi Cubana? Biography, Businesses, Age, Wife, Net Worth, Sons
Next: ROTARY CLUB OF UYO URBAN EMBARKS ON TREE PLANTING PROJECT AS PART OF HER CONTRIBUTION TOWARDS PRESERVING THE ENVIRONMENT