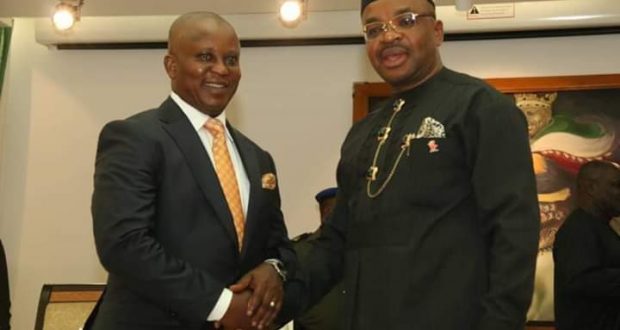 An influential group whose members are chieftains of the PDP; People’s Democratic Party Stakeholders’ Forum, Afaha Atai Ibesikpo, has eulogized Governor Udom Emmanuel for appointing one of their own, Elder Effiong Essien as the Head of Civil Service, Akwa Ibom State.

Speaking during an extraordinary meeting of the group in Afaha Atai, Ibesikpo Asutan Local Government Area, its leader, Comr. Ernest Akpan, described Elder Essien’s appointment as well deserved and a case of putting a square peg in a square hole.

While eulogizing the governor for his policy of political inclusion which he has extended to Afaha Atai, members of the forum assured the State Chief Excutive of their unwavering support and reciprocity for the kind disposition he has demonstrated towards the community.

According to its leader, “the forum will forever support the programmes and policies of Governor Udom Emmanuel’s administration because they are tailored to accelerate socio- economic growth, human empowerment and industrialization”, promising to sustain their advocacy to drum more support for the Udom led administration in the state.

The forum while congratulating Elder Essien who is a son of Afaha Atai, expressed optimism that the appointment will boost the quality of public service delivery in Akwa Ibom State while ensuring civil servants in the State are given priority.

The group hinted that the choice of Essien was a clear indication that Governor Udom aims for capacity and not emotions and sentiment.

The forum stressed that its members have no doubt in Elder Essien because he has proven beyond doubts that he is qualified to man any position given him, noting that the antecedent of the new Head of Service has opened a vista of confidence and trust for him.

According to the forum, the civil service under Elder Essien will be result and welfare oriented, expressing optimism that dedication and humility which have been the trademark of the HOS will play out in his new office.

People’s Democratic Party Stakeholders’ Forum, Afaha Atai Ibesikpo, disclosed that youths, women and elders of the area were elated on the appointment of Essien by the governor, and however advised that Essien should strive to live up to expectations and leverage on his office especially in job creation and tackling unemployment among youths in the community and Akwa Ibom State at large.

Previous: Akan Okon Lauds Governor Udom On New Appointment
Next: The Next Four Years Will be the Most Prosperous in Akwa Ibom State