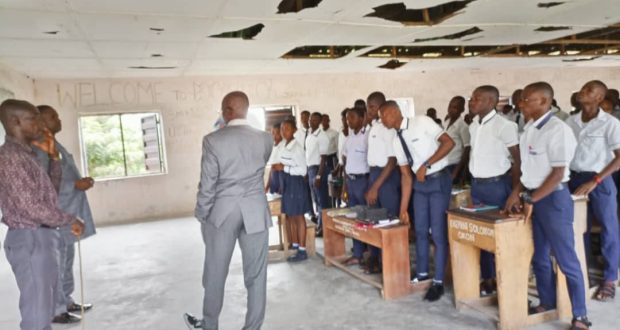 GOVERNOR’S AIDE TASKS TEACHERS ON COMMITMENT AND DEDICATION TO DUTY

…frowns at monopolising of public property by community members

Teachers in Akwa Ibom have been urged to show more commitment and dedication to their assigned duties.

The Special Assistant to the Governor on Education Monitoring, Akparawa Udeme Udofia gave the charge when he visited some schools in Uyo, Nsit Ibom, and Etinan Local Government Areas on routine monitoring of academic activities.

While he commended the members of staff who were at their duty posts, Udofia frowned at some level of lateness and absenteeism that he observed amongst the staff.

He queried the level of absenteeism in schools where an average of twelve to fourteen teachers will not attend school daily and imagined the fate of students in those schools. He was furious that despite this laxity, some Principals will still complain that they do not have enough teachers whereas they have not fully utilized those they have.

The Governor’s aide wondered why a teacher in the state government’s employ will use distance to school as an excuse to be absent perpetually as if the government has not included housing and transport allowance in their payslips monthly.

Stressing on the need for teachers to be more committed, diligent, dedicated, and focused on the discharge of their duties, Udofia directed the Principals and School Heads to instill discipline to achieve the government’s desired results.

“Don’t be loved for abating indiscipline for everything about education has a lot to do with discipline, and don’t forget that the education sector forms the foundation of a good society and as leaders, you should be fair and firm”, he said.

While addressing student-teachers from the College of Education who are on their teaching practice, the SA advised them to equip themselves with the demand of the teaching profession which he says forms the basis for the career, from marking of register, keeping of school statutory records, writing of note of lessons, correct code of dressing, punctuality, cleanliness to checking of lateness and loitering amongst students. He further encouraged them to submit themselves to be properly trained and not come out as half-baked who will constitute a menace to the teaching profession.
Still on professional ethic , Udofia totally condemned the idea of wearing ragged jean and T- shirt to school by corp members no matter the excuse.

Also during the inspection tour, a case of denial of access to water project which was provided to Government Primary School, Ikot Obio Eka in Etinan local government was reported by the school head and other community members to the SA.

According to them, Akwa Ibom State Government in collaboration with the SDG and CDS provided the Solar Powered Borehole to the school but had it placed in the compound of a community member, one Mr. Enefiok Okon, obviously for security reasons. However, ever since the project was completed and handed over, Mr. Okon has denied the school access to the water.

The Governor’s side, who observed with dismay the attitude of Mr. Okon, urged him to as a matter of urgency, grant the school access to the water, and community members too, as the amenity was for the good of members of the public and not his private property.

At Government Technical College, Mbioto 2 in Etinan, the Education Monitoring team coincidentally met with the Board Member III , Rt Hon. Henry Ekpe and some Directors of the State Technical Schools Board who were on an on-the-spot visit to ensure that the technical workshops were set for the accreditation exercise by the National Board for Technical Education (NBTC).

Addressing the technical teachers, Rt. Hon. Henry Ekpe, who was full of appreciation to the SA, Akparawa Udeme Udofia for always keeping tap on the activities of the schools, urged the teachers to lay a good foundation for the students and nurture them for the future.

He encouraged the teachers to always tell the students about their humble beginnings before they got to where they are today as most of the students want to get to the top without going through the ranks.