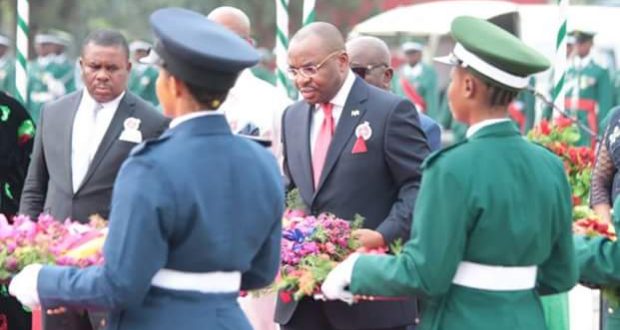 Governor UDOM EMMANUEL has pledged his commitment to uphold the peace experienced in Akwa Ibom state under his watch, warning that he will stop at nothing to protect it.

The governor made the pledge in his speech, after laying the remembrance wreath to mark the 2018 Armed Forces Remembrance Day Celebration at the Cenotaph in Uyo.

Governor EMMANUEL said he was committed to peace in the state, and will not compromise in this regard in order to bring to bear, the attendant development to the state.

Speaking on the welfare of legionaries in the state, Governor EMMANUEL also pledged the total support of his government to the legionaries.

He therefore urged all citizens to partner the government to ensure that their sacrifices for the peace of the nation are not in vain.

Some of the legionaries expressed happiness at the honour given them by the government in recognition of their sacrifices for the nation.

They however urged the government to increase their welfare packages to better their standard of living.

January 15 every year is set aside in Nigeria to commemorate the fallen heroes that lost their lives in various military engagements in the country.

It was formerly celebrated on 11 November of every year to coincide with the Remembrance Day for veterans of the Second World War in the British Commonwealth of Nations.

But it was changed to 15 January in Nigeria in commemoration of the surrender of Biafran troops to the Federal troops on 15 January 1970, thus ending the Nigerian Civil War that sought to tear apart the unity of Nigeria.
2018-01-15
dozzier

Previous: 8 Suspects Arrested For Alleged Murder Of Police Inspector For Ritual
Next: Being an Address delivered by his Excellency, Mr. Udom Emmanuel, Governor – Akwa Ibom State, on the occasion of Armed Forces Remembrance Day/ Laying of Wreath – January 15, 2018.