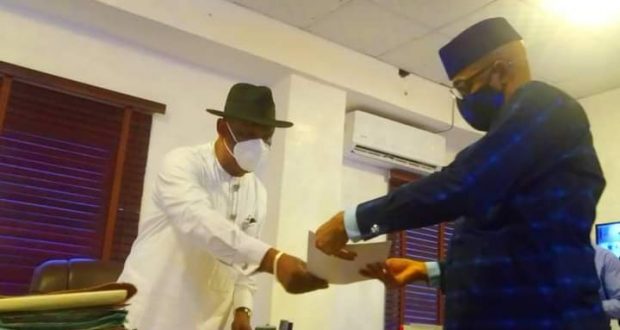 …Hands over to Professor Eno Ibanga

The Chief of Staff to the Akwa Ibom State Governor, His Excellency, Mr Udom Emmanuel has again stressed that all appointee’s of the administration must work together harping that, the Governor must not fail.

Mr Inyangeyen made the remark during a brief hand over ceremony to his successor as Honourable Commissioner for Works, Professor Eno Ibanga at the Dakkada Secretariat today, August 6, 2020.

In his words, the immediate past Commissioner for Works said, the hand-over was only a change of Guard, but the Government and vision remains the same.

“It’s the same Government, we’re working in the same direction. We seek to drive the same vision of His Excellency Governor Udom Emmanuel. The Governor must not fail”, Mr Inyangeyen said.

While thanking the Governor for the opportunity given him to serve as Commissioner for Works, Mr Inyangeyen thanked the Management and Staff of the Ministry for their support throughout his tenure and charged them to extend the same cooperation to the incumbent.

He intimated the new Commissioner on the operations of the Ministry, adding that, the Ministry of Works is the most critical and biggest in terms of the number of capital projects under her purview.

Mr Inyangeyen while congratulating his successor on his appointment, expressed confidence that, Professor Ibanga will succeed in his new assignment and pledged readiness to offer any assistance or explanations that may be required of him by his successor in office at any point in time.

Responding, Professor Eno Ibanga lauded Mr Inyangeyen who he described as a hard working man who did his best to achieve so much in the Ministry.

The new Works Commissioner observed that, his predecessor was elevated to higher office, and again congratulated him on his deserved appointment as Chief Of Staff to the Governor, while also appealing to him to use his new office to facilitate and assist the quest of the Ministry of Works to accomplish more for the State.

Delivering the vote of thanks, the Permanent Secretary of the Ministry of Works, Engr. John Itiat lauded Mr Inyangeyen as a father figure who moulded the Ministry into a family.

Engr. Itiat who congratulated Mr Inyangeyen on his new appointment said the outgoing Commissioner had left a good legacy and wished him well on his new post. He welcomed the new Commissioner on behalf of the Management and Staff of the Ministry and pledged their total support for him to succeed.

Highpoint of the occasion was the presentation of the Hand over notes by Mr Inyangeyen to Professor Ibanga.