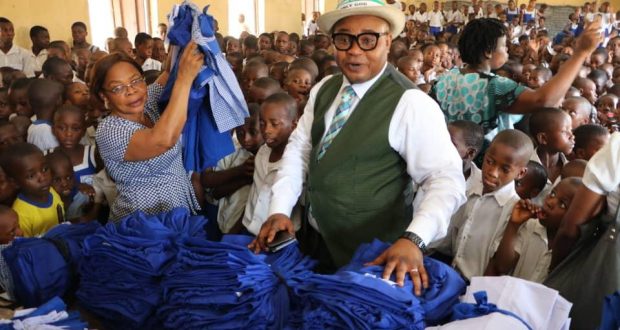 Sam who presented the sets of uniform to the headmistress and teachers of the school on Wednesday, said if the pupils are properly dressed in clean uniforms, it would boost their confidence and excitement to learning.

He said old and torn school uniforms could dullen the morale of pupils and lower their self-esteem and academic performance.

The governor’s aide said he donated the school uniforms to show appreciation to his boss the governor for continuing the free and compulsory education policy of the state.

“I was a pupil of this school and I can recall that I had one set of uniform throughout my stay here. At some point the buttocks of the uniform was torn and my parents patched it, so I had a uniform that had patches of different colours.”

“A torn uniform can have negative psychological impact on the child. It can affect his self expression in the midst of other pupils, hence, his academic performance. That’s why I have come to give back to my school. I am doing this in appreciation of my boss, the governor, His Excellency, Mr. Udom Emmanuel who has kept the promise of continuing the free and education policy.”

He thanked the governor for approving the fencing and construction of a modern toilet facility in the school, saying that with the perimeter fence the case of flooding, vandalisation and theft of properties of the school would be curbed.

Sam lauded the headmistress and teachers of the school for maintaining optimum discipline and sanitation despite the large population of pupils.

The governor’s aide advised the pupils particularly those in primary six preparing for common entrance examination to be good ambassadors of the school as they leave for secondary school.

“As you will be leaving for secondary school, don’t allow your friends to drag you into cultism. Akwa Ibom state government under Governor Udom Emmanuel abhors cultism. Remain responsive and good students and fly the flag of this school with honour”, Sam said.

A pupil of the school, Hosanna Etuk Dan, thanked Prince Emmanuel Sam for the gesture.

Headmistress of the school, Mrs. Rose Nkereuwem, said she was happy to witness positive presence of government in the school.

She thanked Governor Udom Emmanuel for the perimeter fencing of the school and other interventions and lauded Prince Emmanuel Sam for attracting government’s attention to the school and providing uniforms to the pupils.

“I am very happy because very many great things are happening in this school during my time. We have seen the perimeter fencing. We thank the governor for this. We are grateful to Prince Emmanuel Sam for allowing God to pass through him to bring good things to the school

“Today’s donation of uniform to the pupils has really demonstrated his love for the pupils and the school. His presence here has changed a lot of things. I thank him for being a good ambassador of the school”, the headmistress said.