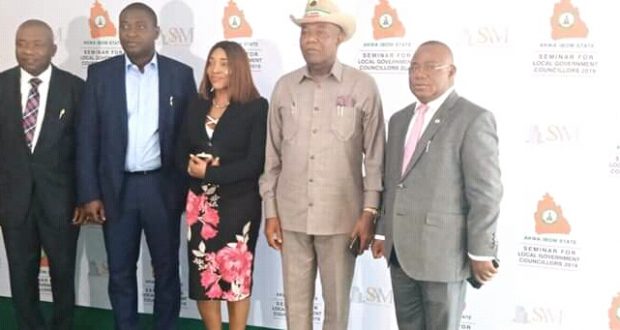 The Governor made this known on Monday December 9th, 2019 while declaring open a 2 Day Seminar for Local Government Councilors at the Ibom Hotel and Golf Resort, Uyo.

Represented by the Secretary to the State Government, Dr. Emmanuel Ekuwem, the state’s chief executive noted that the peaceful disposition of Akwa Ibom has made the state to become a destination of choice for investors.

Speaking on theme, STRENGTHENING GRASSROOTS ADMINISTRATION TO ACHIEVE THE COMPLETION AGENDA OF GOVERNOR UDOM EMMANUEL, the governor assured the Councilors that his administration will ensure that development is spread across the entire State.

The Governor who identified power as a major boost to viable economic productivity in a country, promised to put things in place to ensure that there is “power for all” by December, 2021.

As the chief security officers in their respective wards, Mr. Emmanuel called on the councillors to remain at alert at all times and report any suspicious activity that might threaten the peace and security of their communities to their Council Chairmen.

He sued for the collaboration of the grassroots lawmakers to achieve his 8 Point Completion Agenda.

The Economic Development Boss asserted that “the successful actualization of Governor Emmanuel’s 8 Point Completion Agenda will bring about a coordinated and sustainable development that will produce multiplier effects on economic growth, employment generation and wealth creation that will in turn lead to economic stability”.

He said that Councilors act as bridges between the electorate, the Council and the State, therefore, they need to find out the core area of needs of their people and communicate same to decision makers who will guide them in allocation of projects.

Mr. Okon called on them to establish good communication and build strong relationships with their people and also ensure that government projects sited in their are protected from vandals.

On his part, the host and Commissioner for Local Government and Chieftaincy Affairs, Mr. Udo Ekpenyong, appreciated the 359 Councilors for their harmonious relationship with the Governor Udom Emmanuel led administration.

He expressed the optimism that the Seminar would help the councillors to continue to contribute their quota to the development of Akwa Ibom State.