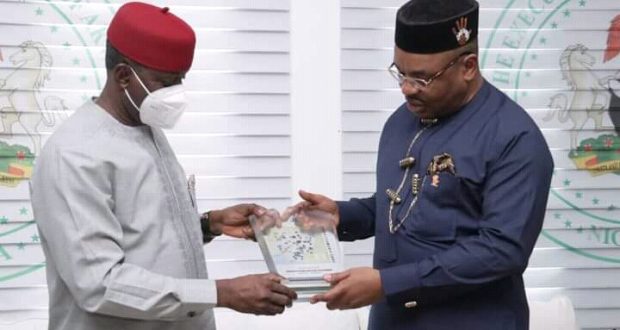 Governor Udom Emmanel has stated that the reactivation of the Aluminium Smelter Company of Nigeria, ALSCON located in Ikot Abasi, Akwa Ibom State, will stimulate the entire economy in the country.

He has promised that his administration will partner with the federal government to ensure that the Aluminium factory comes back to live.

He stated these when the Minister of State, Mines and Steel Development, Dr. Uchechukwu Ogah, paid him a visit on Thursday, at Government House, Uyo.

The Governor described the steps taken by the Federal Government positive steps in the interest of the country and the masses,

“As a state we are willing to give all the necessary support so that the project can actually come on stream.

The Governor maintained that the bringing back the project was beyond partisan politics and smacks development in governance.

The governor thanked President Muhammadu Buhari for approving steps to revamping the Aluminium Smelter Company in the state, describing the move as efforts towards economic viability and the much needed diversification

Earlier, the Minister assured that the Aluminium Smelter Company of Nigeria (ALSCON) will be reactivated before 2023.

The Minister who revealed that President Muhammadu Buhari has directed that the Aluminium Smelter Company of Nigeria (ALSCON) at Ikot Abasi be revamped, expressed optimism that at the end of the present administration, the company will commence operations.

He added that his two-day facility visit to ALSCON will ascertain the level of work at the company, and assured Akwa Ibom people that glorious days await the state soon.

“I am going to visit ALSCON to look at the activities there. The President has mandated that ALSCON should be reactivated as soon as possible, so we believe that before the end of this administration ALSCON will be running.

“A lot of approvals have been gotten from the Federal Executive Council, concession for the utilization of gas, so I believe with all the efforts put in place ALSCON will be a glorious outcome”.

Dr. Ogah further explained that with the intervention of the Federal Government in the moribund status of the company, other legal issues he noted, will be resolved.

“It’s a growing concern and we believe that they will be sorted out as we keep progressing we believe that based on the intervention from the Federal Government all the legal issues will be resolved soon”, he noted.

The Minister for State, Mines and Steel Development pointed out that the Federal Government seeks partnership with Akwa Ibom State Government to create ease and a hitch-free atmosphere for solid mineral exploration in the state, adding that the collaboration will create opportunities for employment and wealth creation.

“We believe that it’s time for Akwa Ibom State to develop the solid minerals in the state, we are looking at how to synergize, to collaborate with the state government so that we can have good relationship between the Ministry of Mines and Steel and the state so that exploration of minerals in the state will be with ease and hitch-free.

“One of the reasons I am here is that we are seeking synergy and collaboration between the state and the Federal Government on how we can work together to harness the potentials of solid minerals in the State.

“There are a lot of solid minerals abundant in Akwa Ibom State and we believe that the synergy we are creating will give rise to great opportunities that will lead to massive employment of the Nigerian youths and wealth creation for people”.