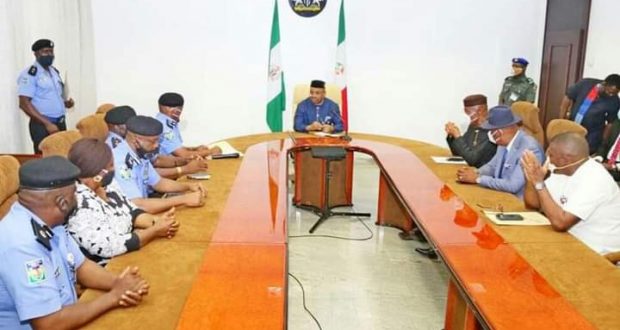 Governor Udom Emmanuel has advised the new Akwa Ibom State Commissioner of Police to carry out his duties with fairness without political and illegal interference, insisting that as Governor he will not encourage him on an illegal errand.

“Let me say this that as you are here, I will never ask you to do anything illegal for me. I have never asked for injustice against mankind. It’s something against my life principles” he said.

The Governor however assured of a good working relationship with the Police authority and other security agencies in the State for effective security of the State.

Mr Emmanuel maintained that when a government and people work with the security agents without asking for any illegality such society will always experience peace and harmony.

“I want to first of all welcome you and let me register sincerely on behalf of the entire Exco and citizens of this State and our utmost thanks to members of your team”.

He promised his administration’s zeal to support the command noting that Akwa Ibom State is a very serene State to work in.

The new Police Commissioner, Mr. Amiengheme Andrew, in his address, stated that he hoped to give the citizens a sense of security and stamp out all forms of criminality in the State.

“My primary aim as I’m being posted to this Command is to make sure the citizens of Akwa Ibom State sleep well. There will be zero tolerance for any forms of criminality no matter how small or big. It will not be tolerated”.

He expressed gratitude for the reception accorded him in the state and solicited for cooperation of citizens with officers of the Force maintaining that, security is everybody’s business.

He called on members of the public to alert the force of any case of lawlessness by its men, restating his commitment to rid the Akwa Ibom Police Command of corrupt elements.