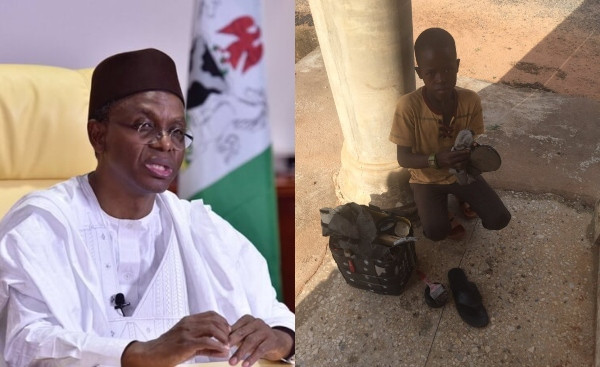 Good Luck just shined on an Almajiri boy, as Kaduna State Governor Nasir El-Rufai has pledged to sponsor his education from primary school till he graduates from the University.

Meanwhile, the promise came after Twitter user @el_bonga shared a photo of the Almajiri boy that learnt how to polish shoes for commercial purpose because he doesn’t like to beg. The 13-year-old boy identified as Usman, had also said that he was out of school because he had no sponsor.  He tweeted;

This is 13-year-old Usman, an Almajiri boy from Maiduguri. Because he doesn’t like to beg, he learnt how to shine and repair shoes from his brother where he earns an average of N500 a day. When I asked him about school, he said: “even if I want to school, no one will sponsor me.”

Reacting to the tweet, Governor El-Rufai described the young boy as ‘hardworking’, and further promised to sponsor his education. Read his tweet below;

Where is this industrious boy? How old is he? Kindly bring him to me in Kaduna. I will sponsor him to attend a boarding primary school and upon completion until he graduates from university by the Grace of God.