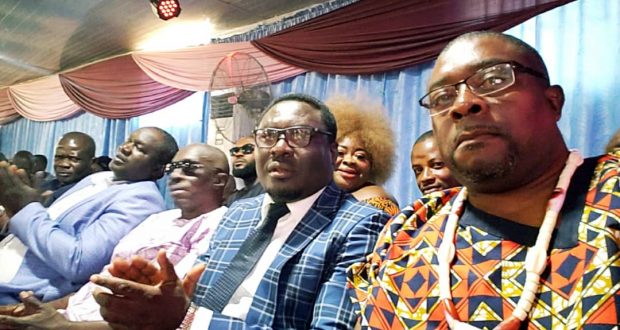 It was celebration galore yesterday, as the Senior Special Assistant to Governor Udom Emmanuel on Grassroot Mobilization, Hon. Inibehe Umah led friends and associates to a Thanksgiving service at A TOUCH OF GREAT GLORY INTERNATIONAL MINISTRY,Uyo, to thanked God for the Supreme Court judgement in favour of Governor Udom Emmanuel.

Hon. Umah in his remark at the Church service said, Thanksgiving is at act of appreciating God for his goodness, and a channel through which one is close to God and obtained more blessings, according to him, “some of us here went round the 31 LGAs to give fuel during the 2019 PDP Campaigns. I want to thank God that nothing happened in all the LGA’s we visited except in Urueoffong /Oruko, where one of the motorists came with a leaked motocycle tank. After refueling, as he start his motorcycle that had a leaked fuel tank, and it caught fire. But we thank God that no other vehicle or motorcycle was affected aside from that single motorcycle incident. We give God all the glory.”

He equally thanked God for his reappointment and elevation to the office of Senior special Assistant to the Governor on grassroots mobilization, adding that he will do everything within his reach to set unbeatable records that will make the present administration the eyes of all, he appreciated his boss for his judicious utilization of limited resources in putting Akwa Ibom state in the gobla map.

It could be recalled that during the 2019 General elections Hon. Umah , the progenitor of Udom is Right Organization donated fuel to Transporters at the Grassroots level across the 31 Local Government Area of the state and he considered it necessary to return to God to say thank you for his protections.