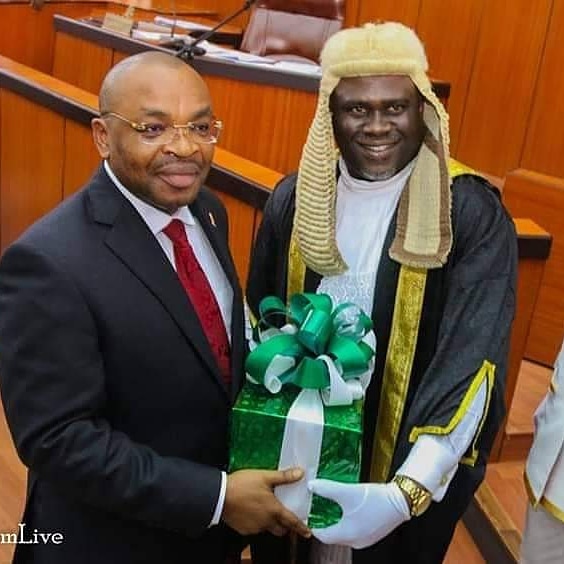 The Akwa Ibom State Governor Decon Udom Emmanuel today presented a total of 597.800 billion Naira budget size for 2020, as against the 672.985 billion Naira budget of 2019. Governor Emmanuel, who was accompanied by some members of the State executive council explained that the state have recorded tremendous achievements in the last four years of his visionary leadership, called on Akwa Ibom indigents in home and in diaspora to join hands in making Akwa Ibom a destination of choice for investors aimed at serving them in truth and improving their living standard.

The governor listed projects covered in the budget to include construction of drainages in Uyo to mitigate flood in the capital city, especially the IBB Way flood, at 2.7 billion Naira, completion of Ibom Tropicana, remodeling of Ibom Five-Star hotel, promotion of micro small and medium enterpries, improvement of the health sector at 4.6 billion naira among others.

While assuring Akwa Ibom people that the government will continue to place top priority in security agencies in the state via provision of logistics needed to maintain the peace enjoyed across Akwa Ibom. He also promised that the existing cordial relationship between the Executive and other arms of government will be maintained.

Meanwhile the speaker of the House, Rt. Hon. Aniekan Bassey have called for synergy between all arms of government for effective legislative business while assuring the governor of his readiness to see to the passage of the budget, appealed to ministries, department and agencies of the government to give their needed supports to fast track passage of the budget as well as implementation to help the state.

In a related development, president Muhammad Buhari today has equally proposed a total of 10.33 trillion naira budget to the join session of National Assembly tagged budget of consolidation.

Previous: For The Record
Next: AKHA condemned herdsmen Attack in Ukanafun ……Seeks For Urgent Interventions