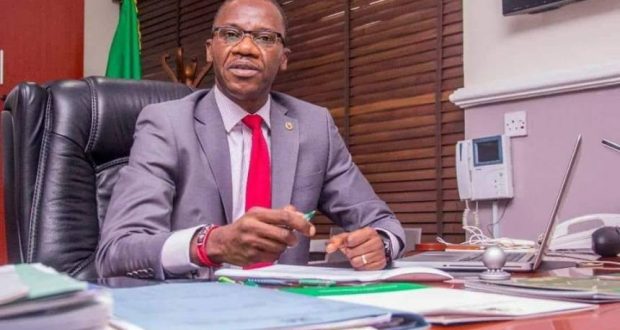 Gov Udom Is Changing The Narrative Of Aks

Governor Udom Emmanuel is fast changing the narrative of the state from a civil service orientation to an industrialised economy by blazing the trail in capital investments and diversification of the economy.
The Commissioner for Information and Strategy, Charles Udoh stated this recently in Uyo, while playing host to members of the Management Board of Tafawa  Balewa Square, Lagos, who paid him a visit in his office.
Charles Udoh said the fortunes of the State have received a boost by the government of Governor Emmanuel who have catapulted the economy to enviable heights by attracting huge capital private sector investments to the state in agriculture, industrialization and tourism.
The Information Boss who emphasized that, Mr. Udom Emmanuel was cut out as the right Governor for Akwa Ibom State at this moment said, the state has received significant National and international attention through the landmark achievements of the Governor, adding that apart from assuming the position of the sports capital of Nigeria, the state has also bagged a 3 Diamond National Sports Award with another national award in waiting for the Governor.
Represented at the occasion by the Permanent Secretary in the Ministry, Pastor Praise Okon, the Information Commissioner, said the visit by the team to the Ministry was apt, as the Ministry is the custodian of the information bank of the state as well as the content management organ of the state website.
He commended the management board of the Tafawa Balewa Square, Lagos, for their foresight in embarking on tour of states of the federation to gather useful and relevant materials to boost the national trade and international business centre in Lagos emphasizing that with such a catalogue of materials, Nigeria will be able to present a robust national trade and tourism package that will make the country compete favourably with her counterparts in the global scene.
The delegates from the management board of the Tafawa Balewa square, Lagos, led by Umar Joseph B, Head of Commercial Services in the company of Njoku N.N. Director, Property/Technical Services, had informed the Information Commissioner that, they were in the Ministry to gather relevant materials on Akwa Ibom State that can boost National trade and International business including investment and tourism potentials of the state.
The team commended the pro-active nature of the Ministry and its resourcefulness, disclosing that, the Ministry has proved its mettle as the information machinery and image managing organ of Akwa Ibom State Government, from the volume of materials collated from the Ministry and the functional website of the state under the supervision of the Ministry.
Highlight of the event, was the presentation of the different publications of the Ministry to the team from Tafawa Balewa Square management board.
2018-02-15
dozzier

Previous: Inclusion Of Akwa Ibom Youths In Governance Will Be A Priority From May 29th, 2019
Next: You Are Like Pastors, Not Warriors – Imoh Okon Tells Nigeria Police Force